Please refer to our Privacy Policy for important information on the use of cookies. By continuing to use this website, you agree to this.
Home Rankings & Data Influence 100 The Influence 100 2022 Insights: Teams, Budgets, Agencies 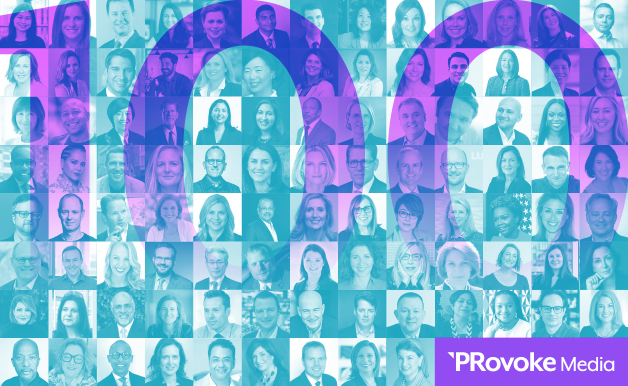 The number of CMOs and CCOs reporting to the chief executive or chair of their organization is even higher this year, a whopping 81% compared to 72% last year and 73% in 2020. This rise seems to have come at the expense of the chief operations officer and chief financial officer roles, as none of our Influence 100 report into either of these roles. Last year, the figure was 6% for COO and 2% for CFO. Oversight by the chief marketing officer rose too, by just one per cent compared to last year. And 7% of the cohort report into other functions such as corporate relations director and chief impact officer. 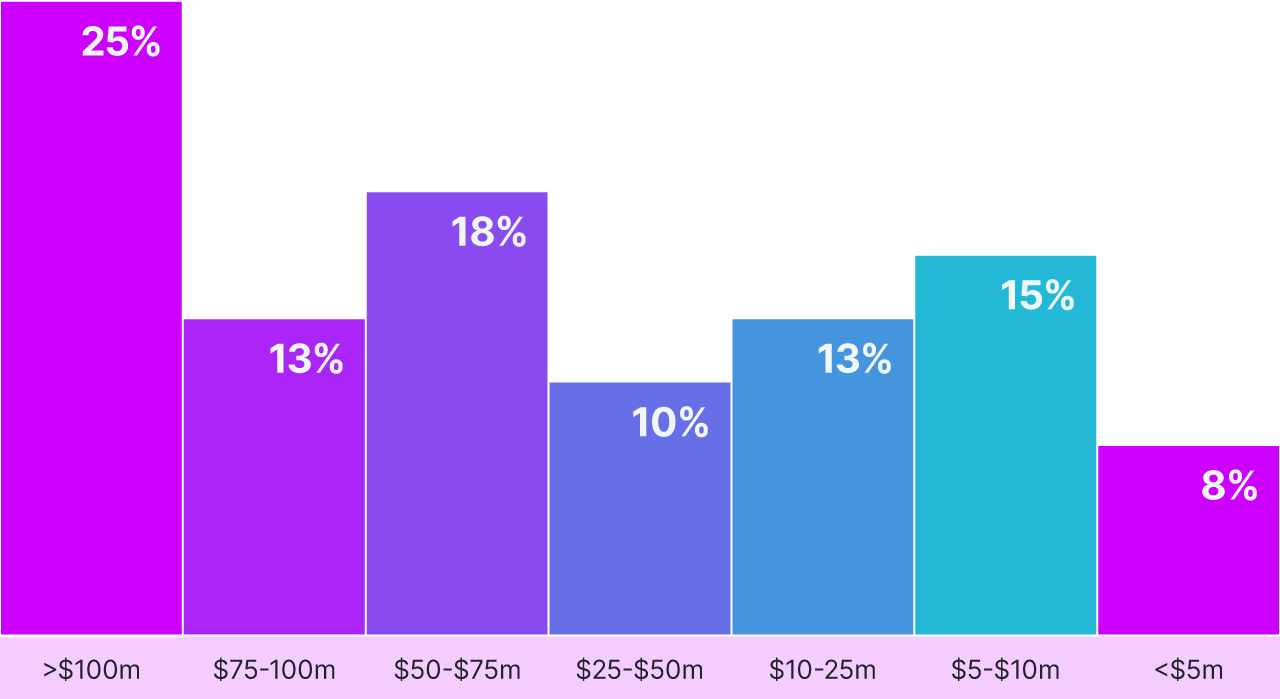 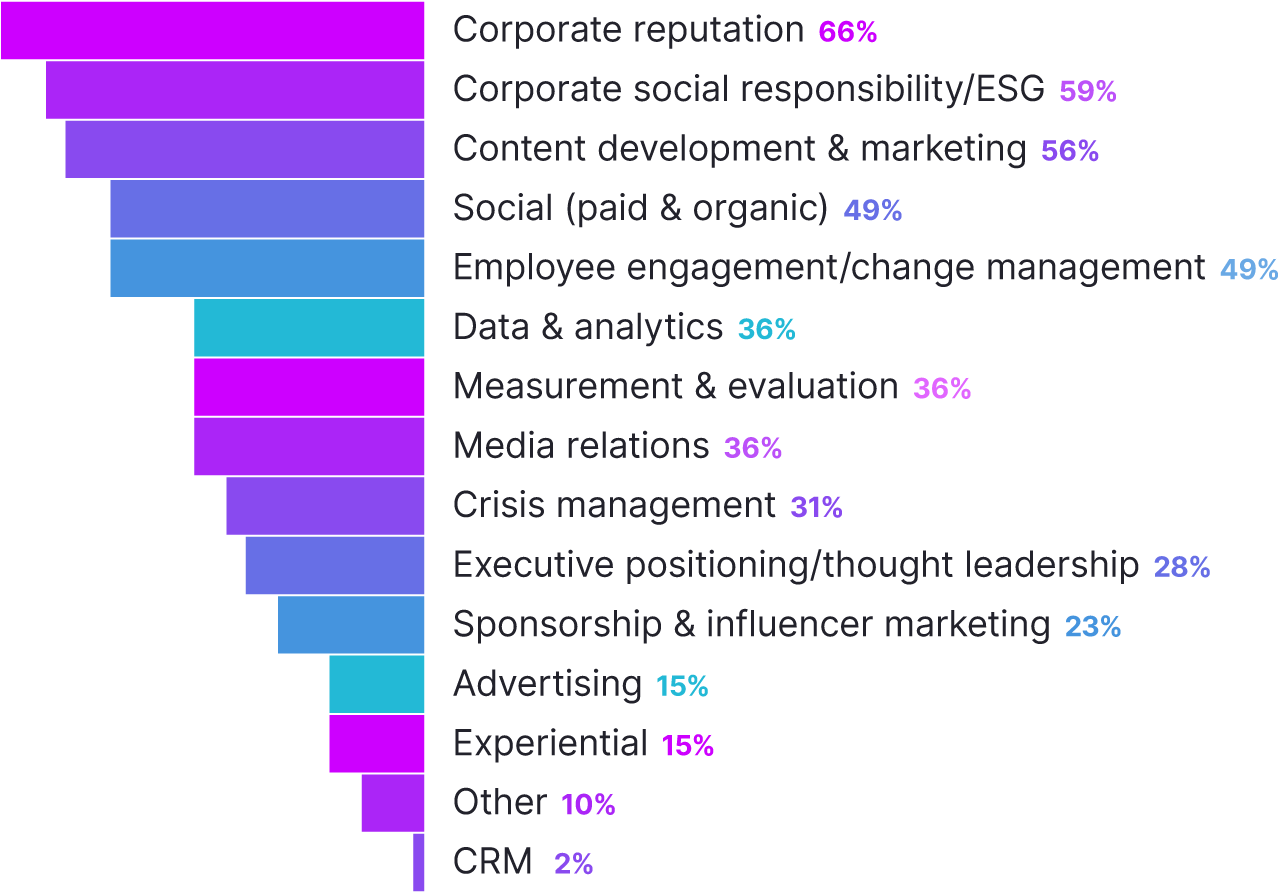 There are big changes ahead for spending priorities for our Influence 100. Although corporate reputation remains the top budget priority, up one per cent from last year to 66%, the new category of corporate social responsibility/ESG is set to be a major area of spend, at 59%. This reflects a growing focus in both the industry and the wider landscape on environmental and social issues. Content development and marketing has also jumped up the list, up from a priority area for 46% last year to 56% in 2022.

Social media, by turn, has decreased as a priority spending area. Last year it was second on the list, as a priority for 60%, this year it has slipped to joint fourth alongside employee engagement and change management, both at 49%.

Other areas of note include data and analytics, and measurement and evaluation which are both at 35% alongside media relations. Crisis management has increased fairly dramatically, up from 17% last year to 31% this year. Advertising, meanwhile, has slipped down the list, from 23% last year to 15% this year.

CRM was the least important spending area for our respondents, holding steady at 2%, the same as last year. But ‘other’ areas, such as public affairs, research and alliances/partnerships, have become more important, up to 10% compared to just 2%, and joint bottom of the list, last year.

How confident are you about the resilience of the sector you operate in, post-Covid?

Has confidence in the resilience of the sector they operate in slipped for our CCOs and CMOs? The data suggests so, with just 33.5% saying they feel extremely confident compared to a reassuring 51% last year. Those feeling very confident, however, increased from 40% to 50%, and so did those feeling somewhat confident, up from 9% to 14%. Perhaps most worryingly, 2.5% of respondents said they didn’t feel confident, and this figure was zero last year.

How many people are in your team?

For the last few years, we’ve seen a steady rise in the number of our CCOs and CMOs managing teams of more than 100 people, but this year the trend has stalled and in fact, the number has decreased slightly to 48% compared to 52% last year. The number managing teams from 51-100 also slipped to 21%, down from 23% last year. Conversely, the number left with teams of just 1-20 almost doubled, up from 12% last year to 21% this year.

When asked about working models, hybrid working remained the norm for the overwhelming majority – 84%, although this compares to an even more overwhelming majority of 92% last year. Just 7% were back in the office full time. And interestingly, although none of our respondents said they were anticipating a mostly or fully remote working model last year, this year 9% stated that their current model was indeed mostly remote, although none were fully remote.

Our Influence 100 have a say over much more than just public relations – for which 100% are responsible for hiring. As per last year, the vast majority of respondents, up to 71% from 69% in 2021, are the primary decision-makers for digital and social media agencies. Some 32% have responsibility for advertising agencies, although this figure is down significantly from last year’s 41%. Other specialist agencies managed by our cohort included brand, content, ESG, research, public affairs, data and insight, measurement and design.

There has been a huge change in the way CMOs and CCOs work with their agencies in the last 12 months if our data is anything to go by. A full 16% now say they have one global agency of record – in 2021, this figure was just 2%. And the number of respondents working with firms on a project basis has dropped considerably, from 34% last year to 22% this year. The percentage with a global AOR who also work with other firms dipped only slightly to 36% compared to 39% last year, and the number with separate AORs in each region dropped from 14% to 12%. 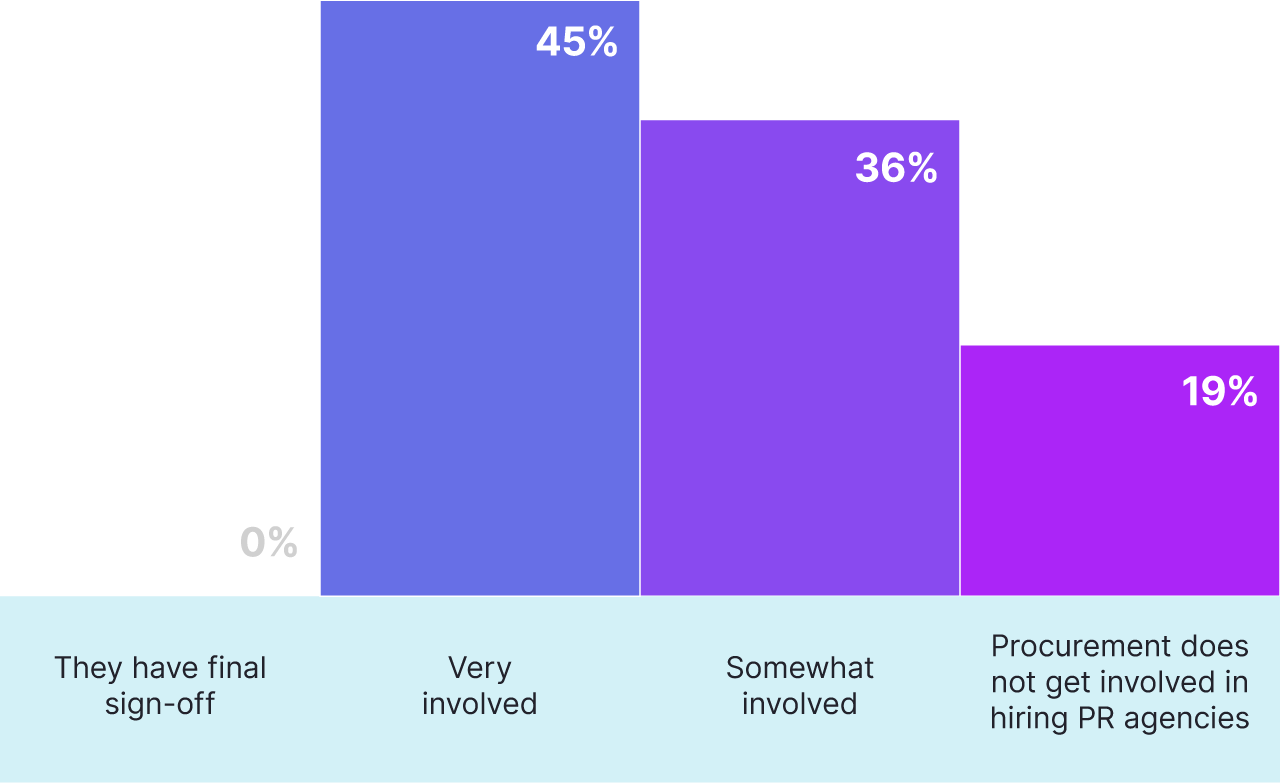 Which agency services do you anticipate making an effort to bring in-house?

This is only the second year we’ve asked our leaders which agency services they would be looking to bring in-house, but we’ve already seen significant changes. A full 39% said they would be looking to bring content production in-house, compared to 28% last year. In fact last year the largest proportion, 30%, said they wouldn’t be looking to bring any services in-house. This year the figure was down to 24%. Bringing social media in-house is on the agenda for 37%, up from 30% last year, and media relations is a priority for 29%. Nearly a quarter, meanwhile, are pondering bringing creative idea generation in-house, up from 18% last year and the same proportion, 24%, are looking at bringing data and analytics in-house. Influencer marketing remained a less interesting option, with just 7% thinking of bringing it in-house. Other options included research and martech.

How would you rate your overall satisfaction with your PR agency partners? 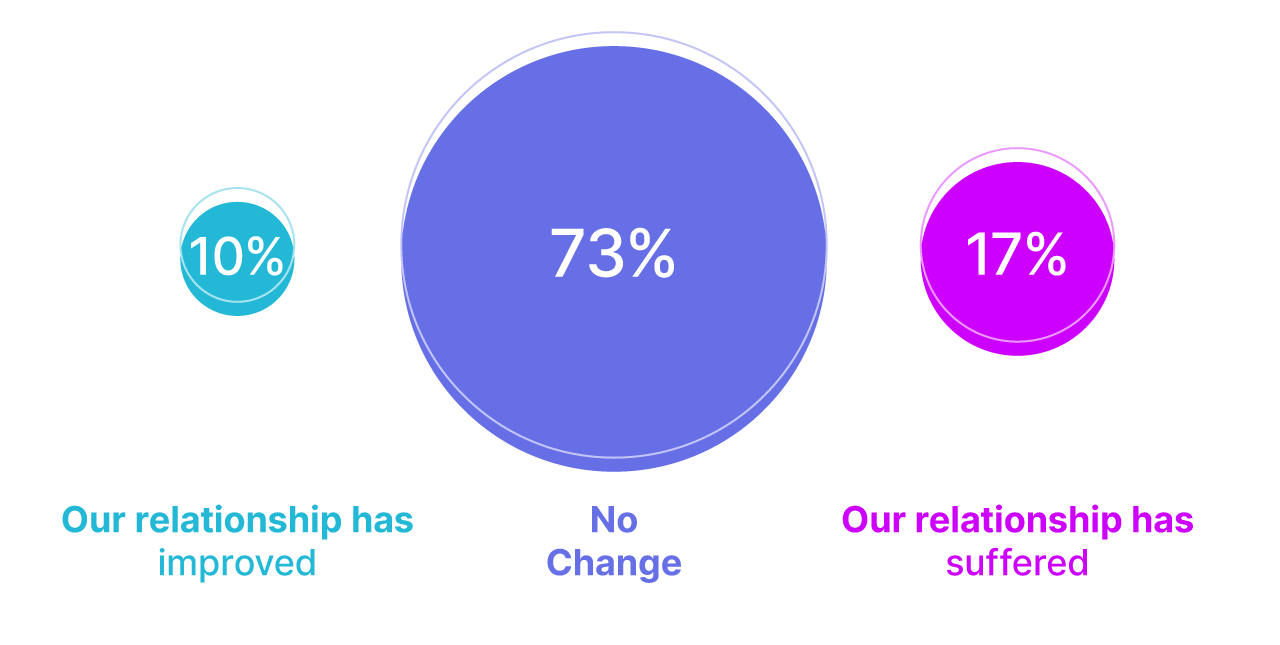 How has the pandemic impacted the expectations you have of your PR agencies?

Our final two questions concern how relationships and expectations have changed over the course of the pandemic. The proportion of influencers saying their relationship with PR agencies had suffered due to remote working rose from 10% last year to 17%, suggesting that Zoom isn’t always the way forwards. By turn, the number who felt their relationship had not changed fell slightly from 80% to 73%, and those who felt relationships had actively improved stayed stable at 10%.