Please refer to our Privacy Policy for important information on the use of cookies. By continuing to use this website, you agree to this.
Home Rankings & Data Influence 100 The Influence 100 2019 Insights: Challenges, AI, Diversity & Influencers

Intro & Methodology | Profiles | Demographics & Background | Teams, Budgets & Agencies | Challenges, Diversity & Influencers |  Inspiration & Most Admired | Crossover Stars | Rising StarsThe following data is based on responses from a survey sent to this year's Influence 100, and where applicable, further analysis. Some percentages might not equal exactly 100% due to rounding.

We asked our Influence 100 how their CEO evaluates PR and communications, and reputation benchmarking came out even further ahead of the other options than previously: 86% compared with 80% last year and 63% in 2017. While sales and lead generation garnered zero responses in 2017, this year it was cited as one of the ways the C-suite measures the success of comms by 14% of respondents, although this was slightly down from 17% last year.

Tactical measurement of PR, including impressions, reach and social engagement was used by far fewer respondents than last year – 32%, compared to 52% in 2018. Of the 14% who said they used other means, the responses varied widely from “Business outcomes (since we don't work in a vacuum) and our ability to drive trust and credibility” to the rather less robust “anecdotal feedback”.

For what reasons does your team use data and analytics?

Our survey shows a real trend for data and analytics increasingly being used in multiple ways within organisations. There was another leap in the number of those who said they use data to allocate resource and spend: 65%, up from 43% last year and 30% in 2017, and another big increase in the number who said they use data and analytics for research purposes: up from 55% to 70%.

Around half – the same as last year – use data and analytics to tweak campaigns in real time. The strongest responses, however, were again for data and analytics being used to generate insights that inform campaign planning (78% compared to 81% last year), and to measure the business impact of communications strategy and activity (84%, up slightly from 81% in 2018).

Is public relations responsible for demand generation at your organization?

This year, for the first time, we included a question in our Influence 100 survey on whether PR is used for demand generation within our cohort's organisation. In other words, is a direct link made between comms and business results? Just under a third of respondents – 31% – said yes, while 50% said no. A further 6% were unsure, and 14% had other responses, including: “on a limited basis in some circumstances”; “indirectly”; and “depends on the maturity of the market”.

Does your organization use influencer marketing?

With influencer marketing continuing to mature (with a few hiccups along the way), we added a question this year to gauge how many organisations now use influencers. A clear majority – 75% – said yes, with only 20% saying no. A further 11% had other responses, including: “We do invest in KOL work on occasion, but have suspended influencer work”; and “we work with influencers, but on an earned/advocacy basis, not in the sense of paid partnerships.”

How confident do you feel about the ROI of influencer marketing? 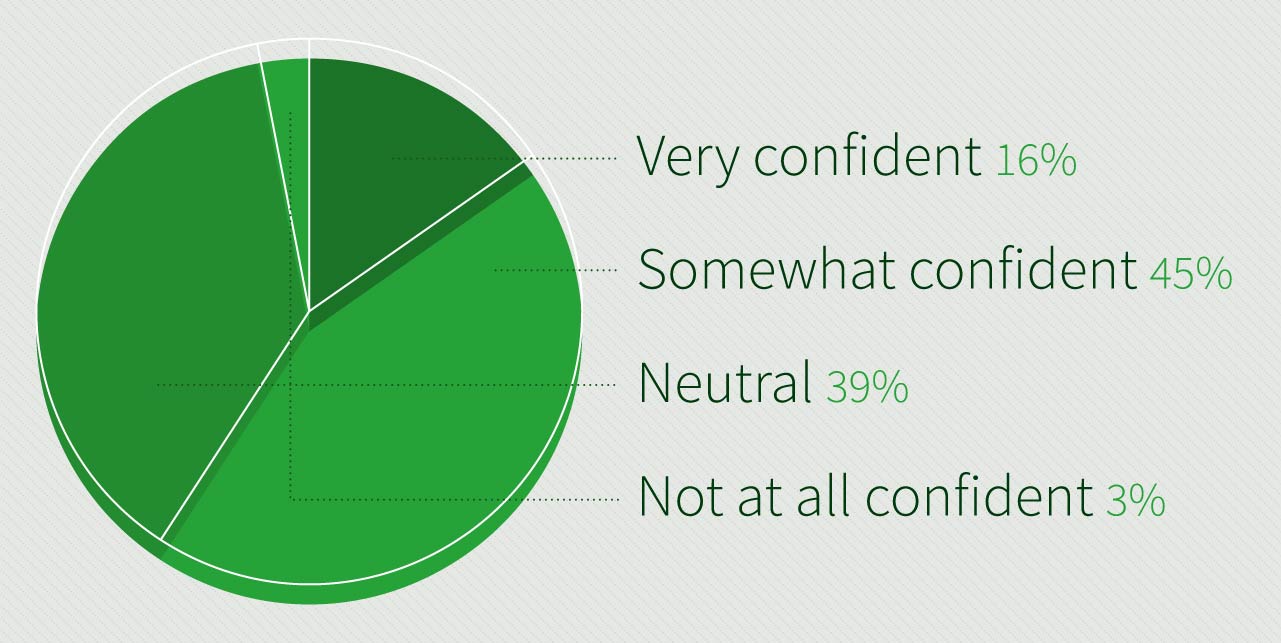 How often does your team partner with HR around employee engagement?

With employee engagement and change management becoming increasingly important elements of (business-critical) communications work, for the first time this year we asked our Influence 100 how often they worked alongside their HR team. A clear majority – 84% – said this happened “often”, with not one respondent saying they never partnered with HR and only 3% saying they rarely worked together. The remaining 14% said they sometimes worked with the human resources department.

CCOs and CMOs: the future

When we asked our respondents about their predictions for the future of the CCO and CMO roles within businesses, the responses were thoughtful, and largely aligned. Most were convinced that there will be more integration and a blurring of the two roles:

“As the CCO and CMO functions continue to evolve, our functions will need to be more strategic and collaborative in our work. With corporate reputation being a top priority for organizations today, it is more important than ever to establish deeper engagements with customers, employees and other stakeholders, and to clearly express the company’s purpose and values. To achieve this holistically across the full spectrum of stakeholders, a close partnership between communications and marketing is essential.”

“They will merge into one role - that of the chief storyteller.”

“These two roles will be integrated in the future to ensure a stronger alignment of brand and corporate narrative, both internally and externally.”

“The lines between communications and marketing will continue to soften and the disciplines will merge.”

“They will increasingly work in a more integrated fashion to advance the interests of their organizations.”

“Joint accountability. In some cases, the roles will merge.”

“Strong integration of CCO and CMO roles, or only one at the C-Suite table.”

There was also a majority view that chief marketing and communications officers would become more important in businesses, and also that they would be more clearly linked with business success:

“The role of CCOs will increase in importance, particularly in B2B industries. CMO roles will increasingly have communications/reputation management KPIs.”

“They will be more important as we prove the benefits of our work.”

“The CMO will be expected to play a larger role in driving growth.”

“Both roles will continue to grow and prosper as all business and industry becomes real-time and demands constant actions and reactions.”

Others saw different kinds of developments for the roles within businesses:

“The CCO roles will be more integrated with other fields like sustainability or customer experience.”

This year, we again asked the Influence 100 to sum up their greatest challenges, opportunities and threats over the past year, and what they anticipated they would be in the year ahead. These ranged from broad-brush (and oft-cited) themes of complex and uncertain geopolitics to company-specific issues such as law suits. The challenges of working with the media were mentioned by many, including fake news, under-invested publishers, click-bait journalism, the real-time news cycle and changing rules of engagement by journalists and media outlets.

Aligned to this, maintaining reputation at the same time as dealing with the headwinds of rapid change was seen as a huge challenge. Communicating company vision and purpose, and persuading cynical journalists that environmental or social initiatives are driven by a genuine desire to do the right thing also came up several times. Pressure from the public, governments, NGOs and other stakeholders was also giving some of our cohort sleepless nights.

Among other challenges were finding talent (and maintaining morale among overworked teams), and managing resources, including fighting for more budget, both for PR itself, and for measurement to prove PR's effectiveness to internal stakeholders.

The impact of artificial intelligence

We also asked our Influence 100 how they think artificial intelligence and machine learning will impact on the marketing and communications industry in the short, medium and long term. Almost everyone who responded to the survey had a view, and there was more consensus this year that while AI and machine learning probably aren’t going to affect the industry hugely in the short-term, the longer-term impact is likely to be more profound, on areas from consumer PR and media relations to investor relations, public affairs and crisis management.

“AI and machine learning will tip the industry on its head. New products, new ways of communicating, new data and analytics.”

“It’s no longer about the 4 Ps of marketing – product, placement, price and promotion; it’s all about the 4 Es – environment, experience, exchange and engagement. The counterintuitive message on this one is that in this evolving world of communications, in order to facilitate authentic relationships, in many cases it must be done through means that are artificial (intelligence) and augmented (reality)… For those of us in this business, we are still in a relationship business, but the nature of how we cultivate those relationships is becoming very different.”

A key benefit cited was the potential for automation to “help with analytics and recurring tasks” and “automate some routine work.” One commentator said: “Acceptance and embedment of these technologies into day-to-day operations will only enhance productivity and decision-making and hence improve effectiveness.”

There were also some thoughtful answers around getting the balance right between science and art, and human and artificial intelligence:

“The science will make the art (what great communicators can do) even more effective in the medium term; beyond that in the long term, I can envision much of our content and messages being generated by the smartest machines available. For the short term, it is hip and cool to talk AI, etc. but the jury is out...”

“It will make personal interaction (human to human) even more important.”

“AI will change the way we do communications, in terms of how we understand brands, customers and products. But in the long term there is something about being human that is unique and AI will just be a process that will help in targeting customers and markets using big data.”

And a handful of our CCOs and CMOs were honest enough to say that they did not have a clue how these technologies would affect their work.

Diversity in all its facets continues to be big theme for the communications and marketing sector, both in terms of what CCOs require of their PR agencies, and how committed they think the industry is to diversity. The number of our respondents who agree their PR agencies must have an ethnically diverse team was around the same as last year, at 67%, but the number who agreed strongly was up from 12% in 2017 to 33% this year. A further 31% were neutral, up again from 28% last year and 19% in 2017, now leaving only a handful of respondents who disagreed with this statement.

There is less conviction when it comes to whether our respondents think the communications industry is committed to recruiting, retaining and promoting people of color, but the picture is improving: 47% agreed or strongly agreed, compared with 37% last year. A further 42% were neutral and only 11% disagreed or strongly disagreed.

When it comes to gender, 77% of CCOs agree their PR agencies must have a gender-balanced account team, a similar number to last year, although, notably, the number who strongly agreed with this statement was up from 30% to 43%. A very small number – 3% – disagreed that gender balance was a requirement of their agency teams.

There was a slight drop in the number of our influencers who agree that the industry is committed to recruiting, retaining and promoting women, from 82% last year to 78% this year, with 22% taking a neutral position. No respondents disagreed with this statement.

There’s a less confident response to the question of whether the industry is committed to recruiting, retaining and promoting those who identify as part of the LGBTQ community: 49% agreed or strongly agreed it was (last year it was 45%), but around the same number were neutral and 6% disagreed with this statement.

There was the broadest spread of opinion about whether the industry is committed to recruiting, retaining and promoting people from diverse socio-economic backgrounds: just 14% strongly agree with this statement, with a further 28% agreeing, while 39% were neutral on this point and 20% disagree or strongly disagree.