The Research: Budgets, Agencies & The Future

The Influence 100: Introduction & Methodology
The Profiles  | The Research | The Crossover Stars | The Rising Stars
Partner Content

The following research is based on responses from a survey sent to this year's Influence 100, and when applicable, our own analysis and research. 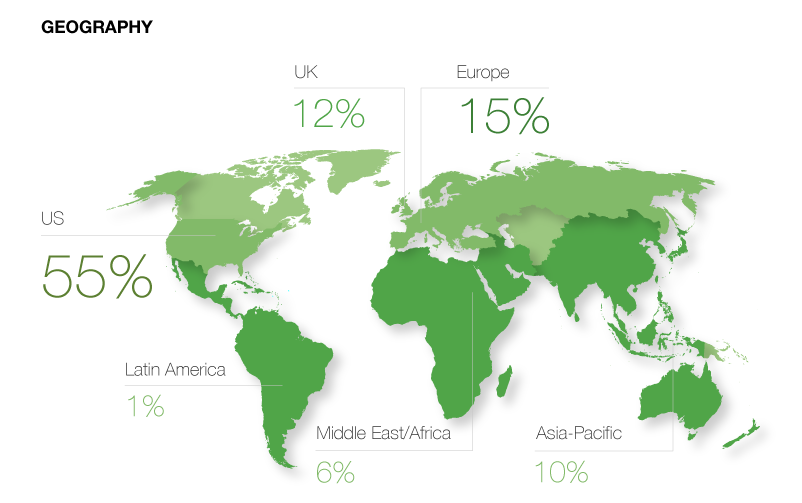 Geography
We strive to ensure the Influence 100 reflects the global, interconnected economy that we operate in. Thirty-percent of this year's list were new this year, sparked mostly by the rise of new executives, industries and companies. The US typically comprises about 50% of the list — this year that number rose to 55%. Meanwhile, the UK held steady at 12%. Fifteen executives from Europe made the list, while Asia-Pacific had six names, six executives from Middle East/Africa and one executive from Latin America.

Sectors
We added new sectors this year to better represent the wide-range of industries recognized on the Influence 100. Consumer continues to dominate with 36% (30% last year), among them Kimberly-Clark, Mondelez, Ford, IKEA and McDonald's. Tech's importance to the economy was reflected in a showing from communications leads from Facebook, Amazon, Airbnb, Uber, among others. Tied for the second-highest ranking sector, industrials (17%) included names from Chevron, Vedanta, Vale, Monsanto and United Airlines. 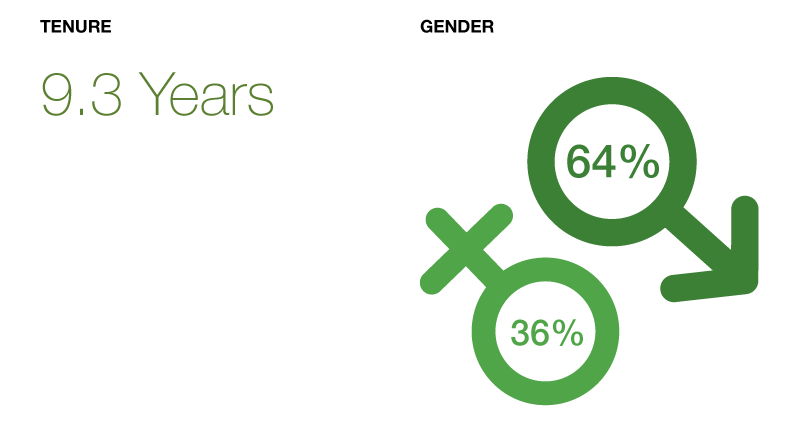 Gender & Tenure
The tenure of Influence 100 communicators is, down slightly to 9.3 years (from 9.5 years in 2015) — in part because there are several executives on the list who are relative newcomers to their organization. Among these, KPMG's Chris Monteiro, United Airlines' Jim Olson and Coca-Cola's Marcos de Quinto have been in their posts for less than a year.

The gender balance of the Influence 100 climbed slightly this year with women making up 36% of the list. As seen in the Rising Stars list of tomorrow's CCOs, we expect the gender imbalance will continue to shrink as more and more women are positioned to take the top roles in coming years. It is estimated that 70% of the PR workforce is made up of women. 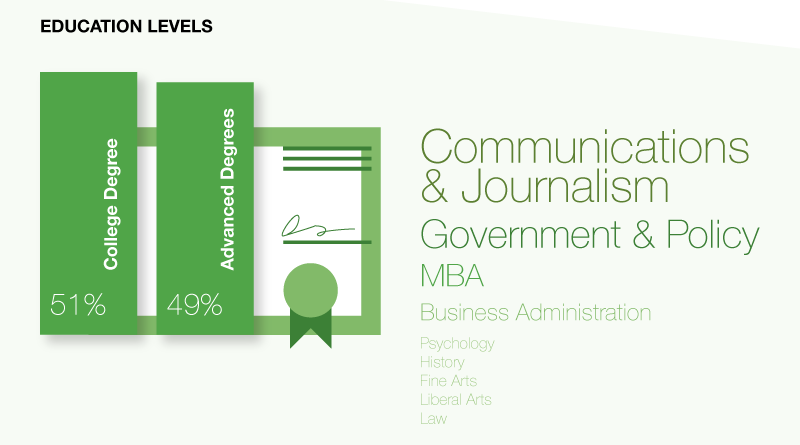 The Early Days - Education
Based on a survey of those selected for inclusion in this year’s Influence 100, 49% have advanced education beyond a bachelor’s degree (down from 57% last year). Journalism and communications were the most popular field of study, followed by government & policy, business and various aspects of liberal arts. The Influence 100 also includes individuals with degrees in law and the sciences, among others. 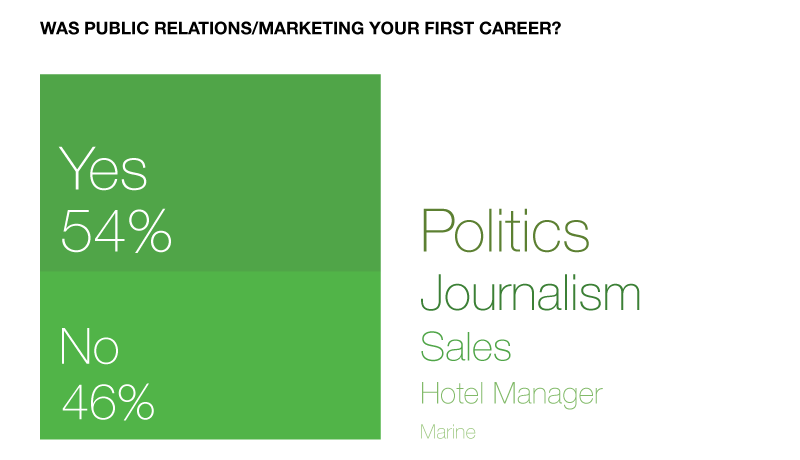 The Early Days  - Career
More than half (54%) selected public relations as their first career — up from about 40% in the same survey in 2015. Politics and journalism were the most common first careers, other early career choices included sales, hospitality and the armed forces.
THE ORGANIZATIONS

The following sections explore the organizational structure and budgets that the Influence 100 operates within. 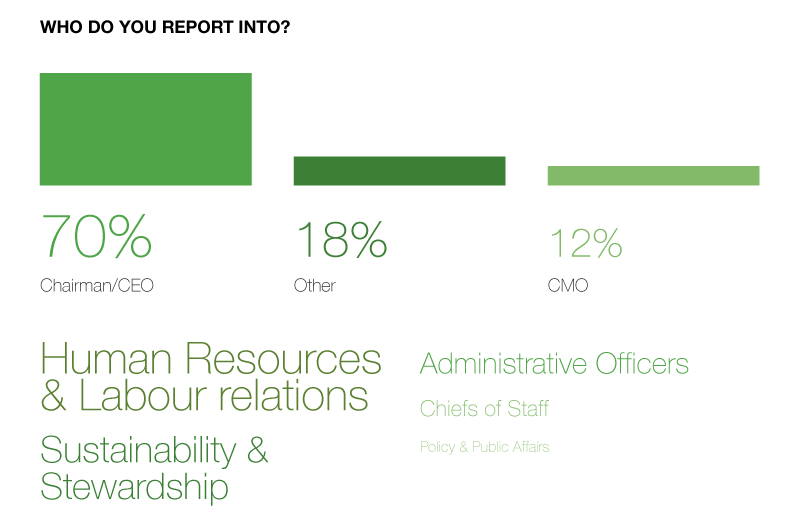 The Budget
The number of executives who oversee a PR budget greater than $100m is down to 14% from nearly one-third last year. Interestingly, last year's 27% was down from 50% in the previous year. Meanwhile the number of people who peg their budget between $75m and $100m held relatively steady at 10% and the number who report a budget between $50m to $74m skyrocketed to 28% — up from 10% in 2015. Nearly 40% oversee budgets that are $10m or less. This means the 100 most influential corporate communicators in the world are likely responsible for budgets well in excess of one billion dollars.

The number who saw budgets increase is down to 30% from about 40% in 2015. Among this group, respondents were equally split between budget increases +10% and those with increases less than 10%. Only 12% experienced contracting budgets this year, but among that group, 8% had budgets cut 10% or more. The vast majority of respondents — 58% — said their budget remained flat in 2016.

The glow of content is showing signs of fading — 59% said they expect to increase their spend on content development next year, down from 71% last year. Meanwhile, the sharp investment in social media also seems to be slowing as only one-third plan to spend more on paid social media and 41% plan to spend more on organic social media — this is down from 67% in 2015 and 80% in the year before. Half expect to increase their spend on PR/corporation, up slightly from last year and pointing towards a slight resurgence in traditional tactics. Analytics and measurement has surged to 50%, up from 38% last year, meanwhile advertising was down to 3% from 24% (although this could be because we added the paid social media option this year) and experiential is down to 9% from 19% in the year prior. 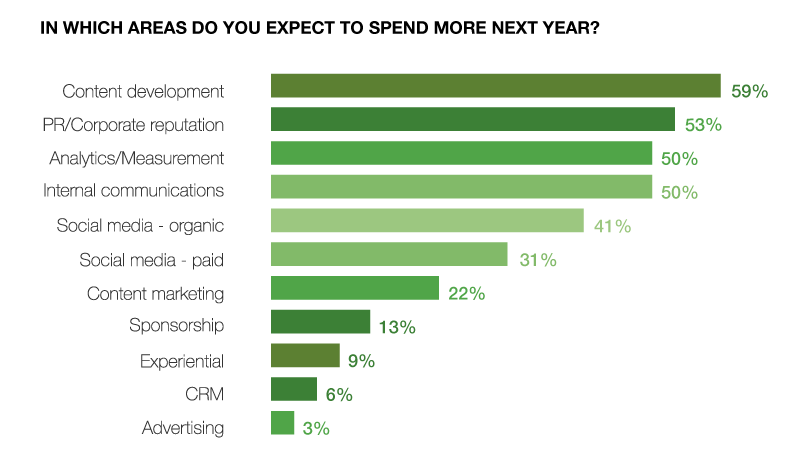 The Team
Half of respondents manage teams of more than 100 people (down from 65% of last year's respondents), while 37% of respondents oversee teams between 21 to 100 people. Thirteen percent oversee teams of 20 people or less, up slightly from last year's 10%. There's some evidence the hiring frenzy of last year is cooling — 27% lowered headcount in 2016 compared to only 6% in 2015. Slightly less than one-third increased their team (last year, it was half) and 46% kept their headcount steady.

The following sections explore budgets and attitudes around agency partners.

Unsurprisingly, 100% of those responding to our survey reported they were the individual primarily responsible for hiring and firing public relations firms.

And once again, many of them reported that they were a primary decision maker when it came to other external communications spending: 64% play a key role in hiring digital and social media firms (down from 70% last year); 68% play a role in sponsorship decisions (up from from 45%); 64% have a role in hiring event management companies (on par from last year); meanwhile 43% (almost par with last year) are the primary decision maker when it comes to hiring advertising agencies.

About 6.5% work with just one global agency of record — slightly up from last year's 5%. Nearly half (48%) enlist a global AOR, plus other support agencies — up considerably from about one-third last year. About 20% employ regional or market AORs (down from nearly 25% last year) and 23% work with agencies on project basis — up notably significantly from last year (16%).

Thirty-eight percent prefer to hire their agency through an invitation-only pitch (down from 55%), meanwhile sticking with a previous agency nabbed 17% and going through an RFI/RFP process garnered 35% (up from 20% last year). The number who prefer to rely on referrals doubled to 10%.

Somewhat disappointing is the number of respondents who rely on agencies for generating new ideas and creative thinking is down 10 points to 33%, but the number looking for strategic counsel and direction soared to 40% (from 25%). Also encouraging, only 17% are looking primarily for tactical support (down from 28%) and 10% report geographic coverage as the main benefit of hiring an agency.

Brands & Companies
Asked to identify companies, other than their own, that managed brand communications and corporate reputation most effectively, the list largely built on last year's — demonstrating the lasting impact of a well-managed reputation . Virgin America and Volkswagen both dropped from the list amid their own challenging news cycles, Coca-Cola, Facebook, Whole Foods and Burberry also faded. Meanwhile Unilever, J&J, Starbucks, Southwest Airlines, BMW, GE, Nike, IBM, Apple, Disney and Google returned for a strong showing. Several brands and companies new to the list made the cut this year, among them: Under Armour, Lego, Salesforce, P&G and Shell.

Agencies
Edelman was — for now the fourth year in a row —  the most frequently cited public relations agency when respondents were asked which firm they most admired. Other firms that made repeat showing include Burson-Marsteller, Weber Shandwick, the WPP network, The OutCast Agency, Brunswick, meanwhile Hill + Knowlton re-emerged. 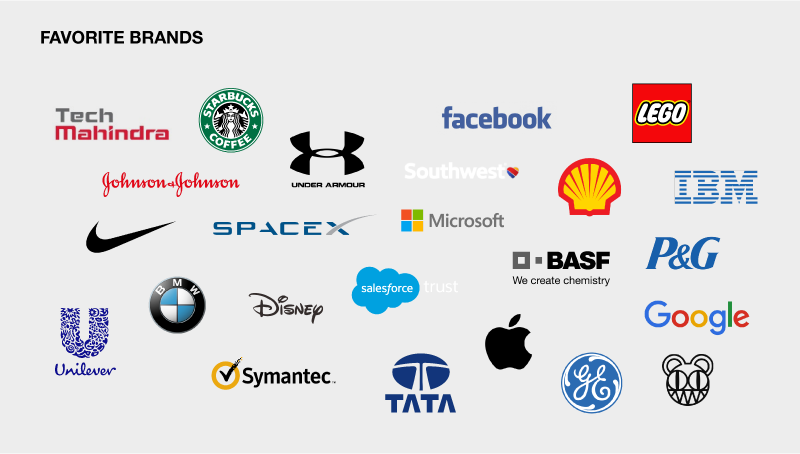 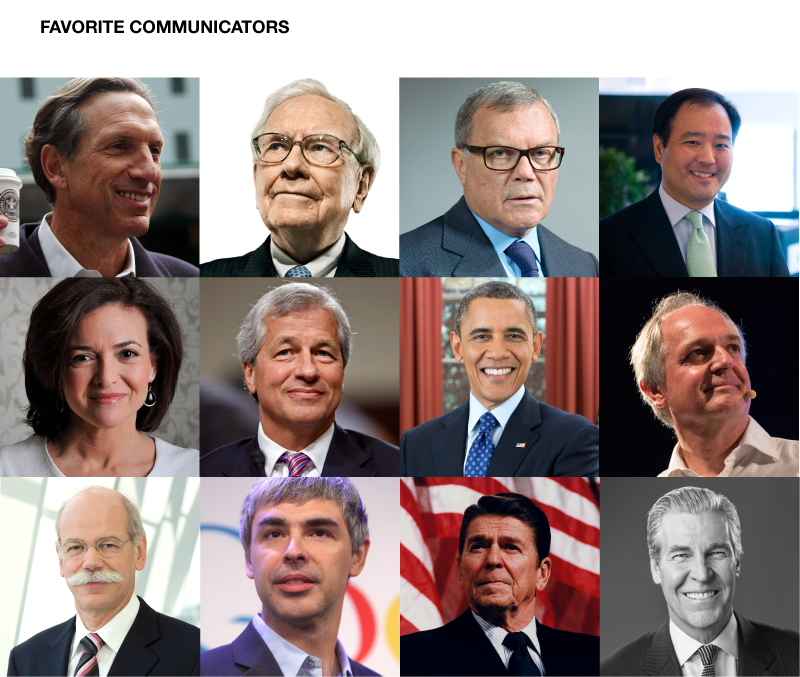 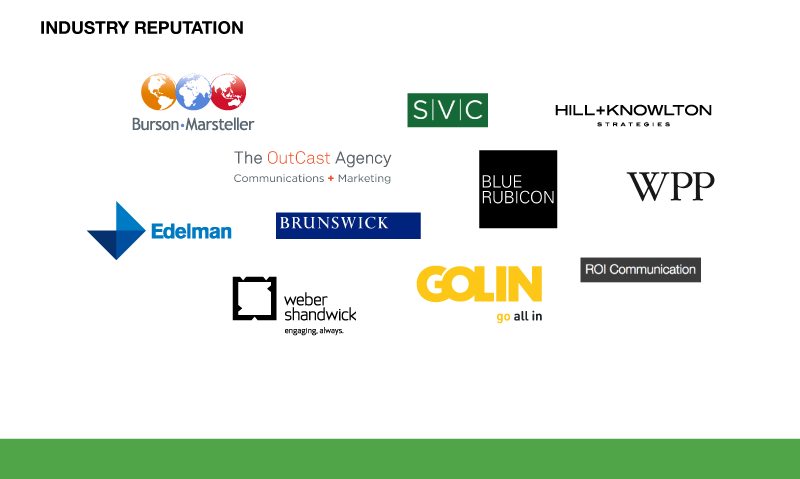