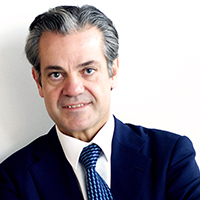 When Marcos de Quinto was named the iconic company’s new CMO in 2014, the media described his appointment as “surprising.” Perhaps this is because De Quinto spent the previous 14 years as president of the company’s Iberia business unit (which covers Spain and Portgual) — but unsurprisingly, this was a region where the world’s best-known beverage maker won awards for innovation, strategy and commercial communication for “Benditos Bares.”

De Quinto has been with the company since, amazingly, since 1982 as part of the marketing department of Coca-Cola Spain. He went on to hold positions that included district manager, distribution manager, and distribution and merchandising manager. In 1988, he joined BSB Advertising as director for southern Spain, where he spent two years.  He rejoined Coca-Cola in 1990 as director of marketing services, Coca-Cola Spain. But his perspective expanded beyond Europe, from 1992 to 1995, de Quinto was a division marketing manager of  Coca-Cola Southeast and West Asia.  He was marketing director of the German Division from 1995 to 1996, after which he became regional manager, Coca-Cola Spain, until he was named President of the Iberia Business Unit.