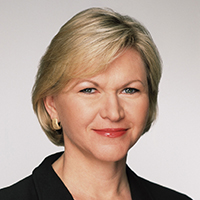 Google Zenia Mucha’s name and one of the top results introduces her as “the Karl Rove of the Magic Kingdom,” a reference to the influence she wields within the company and the message discipline with which she holds the company line with reporters and others.

Mucha has overall responsibility for communications policies and strategic positioning at The Walt Disney Company and its diverse global businesses, including media networks, parks and resorts, studio entertainment and consumer products. She serves as the chief spokesperson for company and oversees media relations and communications strategy. Under her direction, Disney launched D23, the first-ever official Disney fan club, with members in all 50 states and 35 countries.

Mucha joined The Walt Disney Company in 2002, having previously served as senior vice president, communications, for the ABC Broadcast Group and the ABC Television and earlier as director of communications and senior policy advisor to Governor George Pataki of New York. Upon her departure for the corporate world, The New York Times said her departure “deprives Mr. Pataki of someone who was not only the most influential member of his inner circle, but also his most forceful advocate before the press and with leaders of the State Legislature, as well as other politicians.”