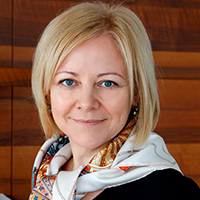 In addition to serving as global head of communications and marketing for Russian investment firm VTB Capital, Olga Podoinitsyna is a member of the company’s board—a level of seniority achieved by relatively few public relations professionals even in more developed markets.

Responsible for the development and implementation of VTB Capital’s communications and marketing strategy, and for communications across Europe, Asia, the Middle East and the USA, Podoinitsyna has overseen the company’s transition from a new market player to an established name in the global investment banking community. According to Yuri Soloviev, chairman of the board of directors of VTB Capital. “She builds excellent working relations based on trust, with both her business partners and her staff.”

VTB Capital has also been named Russia’s most transparent investment company in each of the past three years, a priority for Podoinitsyna, who says: “A transparent communications policy is one of our top priorities…. VTB Capital’s active participation in the global dialogue is important for raising awareness of investment opportunities in Russia among the international economic community.”

Prior to joining VTB Capital in April 2008, Podoinitsyna worked at Deutsche Bank (Moscow) for eight years, and has worked as a consultant at PriceWaterhouse and Burson Marsteller.