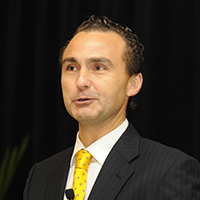 The Mexican national took on the role in 2013 after previously leading corporate affairs, and is charged with presenting a more transparent, friendly face for a company that is among the world’s most fiercely criticized. So far, his efforts have resulted in Monsanto being named one of the world’s top 100 corporate citizens by CR Magazine, which flagged the company’s “commitment to stakeholder engagement, the environment, addressing climate change through adaptation and mitigation, and increasing transparency regarding its operations.”

Madrazo joined Monsanto in 1999, as legal director for Latin America North. Prior to Monsanto, he worked as legal counsel and lecturer in Mexico and the US; his professional experience includes Banamex, TAMSA and the National Law Center for Inter-American Free Trade.