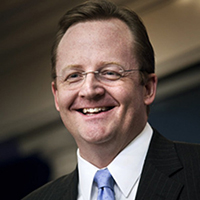 Given that McDonald’s announced its new CCO and its new CMO at the same time, and that both roles report to new CEO Steve Easterbook, it is clear that the fast food behemoth sees a continuing need for separate functions at the highest level of the company. And given that it selected former Obama aide and White House press secretary Robert Gibbbs to lead the corporate relations function— which manages internal and external communications and government and public affairs—it also appears to have at least one eye on the political and social issues that surround everything from its nutritional value to its employee practices.

Gibbs has been a close advisor to the president since 2004, when then-Senator Obama was a first-term legislator from Illinois, and held several senior advisory roles in the White House, serving as President Barack Obama’s press secretary during his first term, then as senior campaign advisor during his re-election campaign. He was described by The New York Times as “the president’s political compass.”

He joined McDonald’s from The Incite Agency, a strategic communications advisory firm he co-founded in 2013.