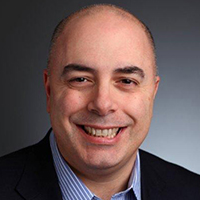 It’s been a notable year for Henry Gomez. He was part of Hewlett-Packard’s notable separation from into two companies – Hewlett Packard Enterprise and HP, he was part of public kerfuffle with FT columnist Lucy Kellaway and has been making creative changes at the newly-minted HP Enterprise.
These moves are all part of a career that has been largely spent working alongside powerhouse Meg Whitman. Prior to joining HP in 2011, Henry founded HSG Communications and also served on the leadership team of Meg Whitman’s gubernatorial campaign in 2009 and 2010. For most of the previous decade, Gomez worked at eBay in a variety of leadership positions under Whitman, including SVP for corporate communications and president of Skype. He’s credit for the role he played in building eBay’s brand during the critical years following the company’s initial public offering.

Prior to eBay, Gomez was VP of Corporate Affairs at HBO, where he oversaw the network’s corporate public relations. Henry also held roles at NYNEX, Ogilvy Adams & Rinehart  and Hill +Knowlton.