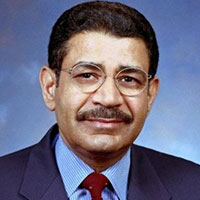 Abubshait brings four decades’ experience of working in public and government affairs for Saudi Aramco, the oil giant that is often viewed as the world’s largest private company. In 2014, he was named Gulf PR Man of the Year by IPRA, in recognition of his wide-ranging contributions to public relations in the Gulf and his hands-on approach to the development of the discipline and its human resources. Abubshait has oversight for maintaining effective relations with the Saudi government, as well as managing the company’s position through public affairs and media activities inside and outside the Kingdom.