Please refer to our Privacy Policy for important information on the use of cookies. By continuing to use this website, you agree to this.
Home Rankings & Data Influence 100 The Influence 100 2017 The Research: Big Questions & Inspiration 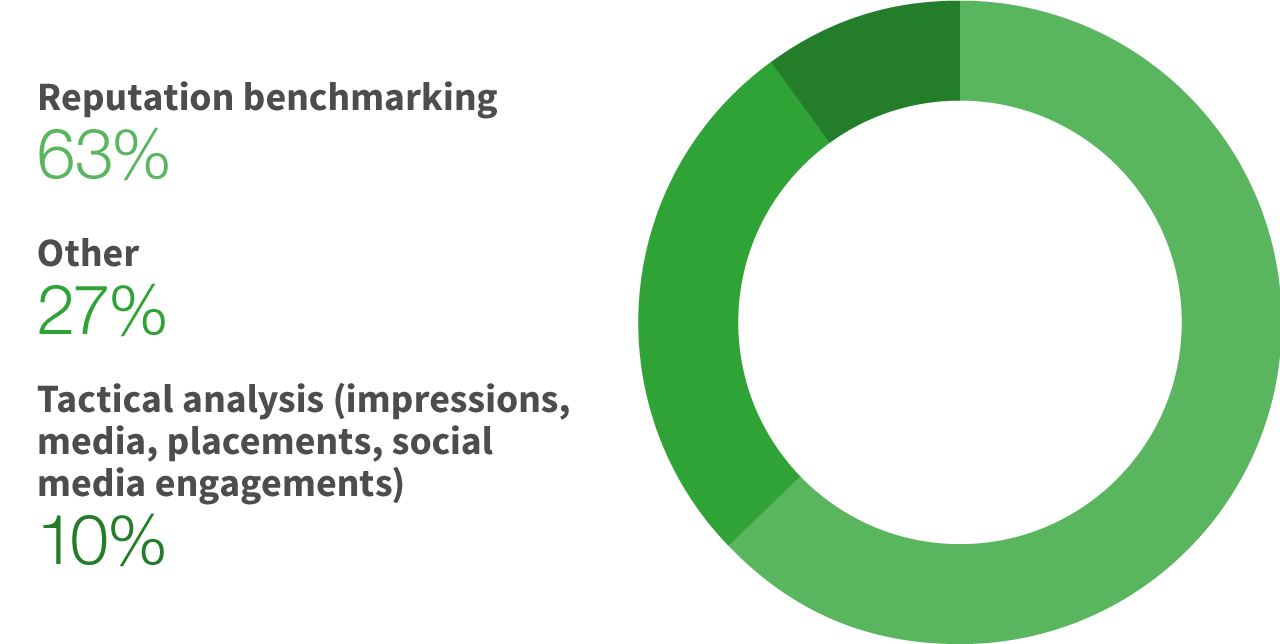 This year, for the first time, we asked respondents how their CEOs evaluate their function. Reputation benchmarking, by far, came out on top. Interestingly, one of the options — sales and lead generation — garnered no responses. Several respondents, however, did indicate their CEOs evaluate PR/communications using "all of the above." Other notable responses:

"A mix of external and internal analytics. No single measure or methodology."

"A variety of ways including all the above mentioned plus others like speed of adaption to change by employees [internal coms], strategic advancement of a specific narrative externally etc."

"All of the above plus tactical analytics."

"On our ability to help enable business outcomes as part of integrated teams."

This year, we also explored the way organizations are using data & analytics to drive and evaluate their marketing and communications efforts. Here's what we found:

- 80% of respondents use data and analytics to measure the business impact of their efforts, the rest do this about half the time (13%) or rarely (7%).

Also new this year, we asked respondents their prediction for the future of the CCO role. "The CCO role will continue to grow in importance and influence," said one respondent. "Comms and reputation management are on the rise: marketing is struggling to find its new mission in post-brand advertising world where the 30-second TV spot has been made redundant."

"As the lines between Comms and Marketing continue to blur, as people engage and consume information from an ever-changing array of sources, and the need to demonstrate ROI increases, the CCO role must adapt/be adapted to succeed and thrive in a 'post-PR' world," said another respondent. "Increasingly the CCO is leveled to report to the CMO. This trend should worry all of us in the industry."

"It is a strategic business role in any forward looking organisation and essentially he/she is part of the leadership team," said Roma Balwani.

"The importance of a company's reputation on its financial success will continue to rise in direct proportion to how fragile reputations have become," said MaryLynn Carver. "Certainly the social media echo-chamber and 'fake news' are playing a role in this fragility, but we are also seeing extreme polarization of key stakeholders' expectations. The CCO role is unique in that it is often the only c-suite entity that has visibility across the company and across external stakeholders to connect the dots and see around corners." 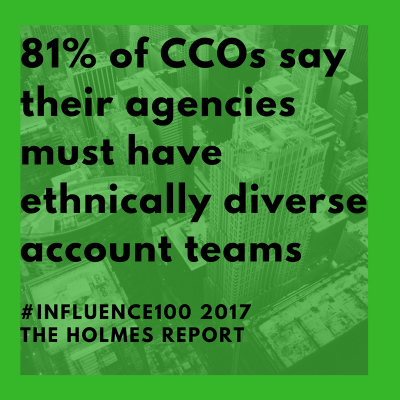 This year, we also asked the Influence 100 for their perspectives on diversity. After some companies have started requiring their agencies to be more representative, we wondered if this could be a more widespread trend. Among the respondents, 81% agree their agency must have an ethnically diverse account team (12.5% agree strongly) and 19% were neutral to the statement. Just over 56% of respondents agree the industry is committed to retaining and promoting people of color and women while 44% were neutral to this statement.

"PR does not have a problem with women in positions of power except at the very top of large, international agencies," said one respondent. "In fact, I think communications is an area more college men should be encouraged to consider." Another lamented about the lack of talent in the APAC region. 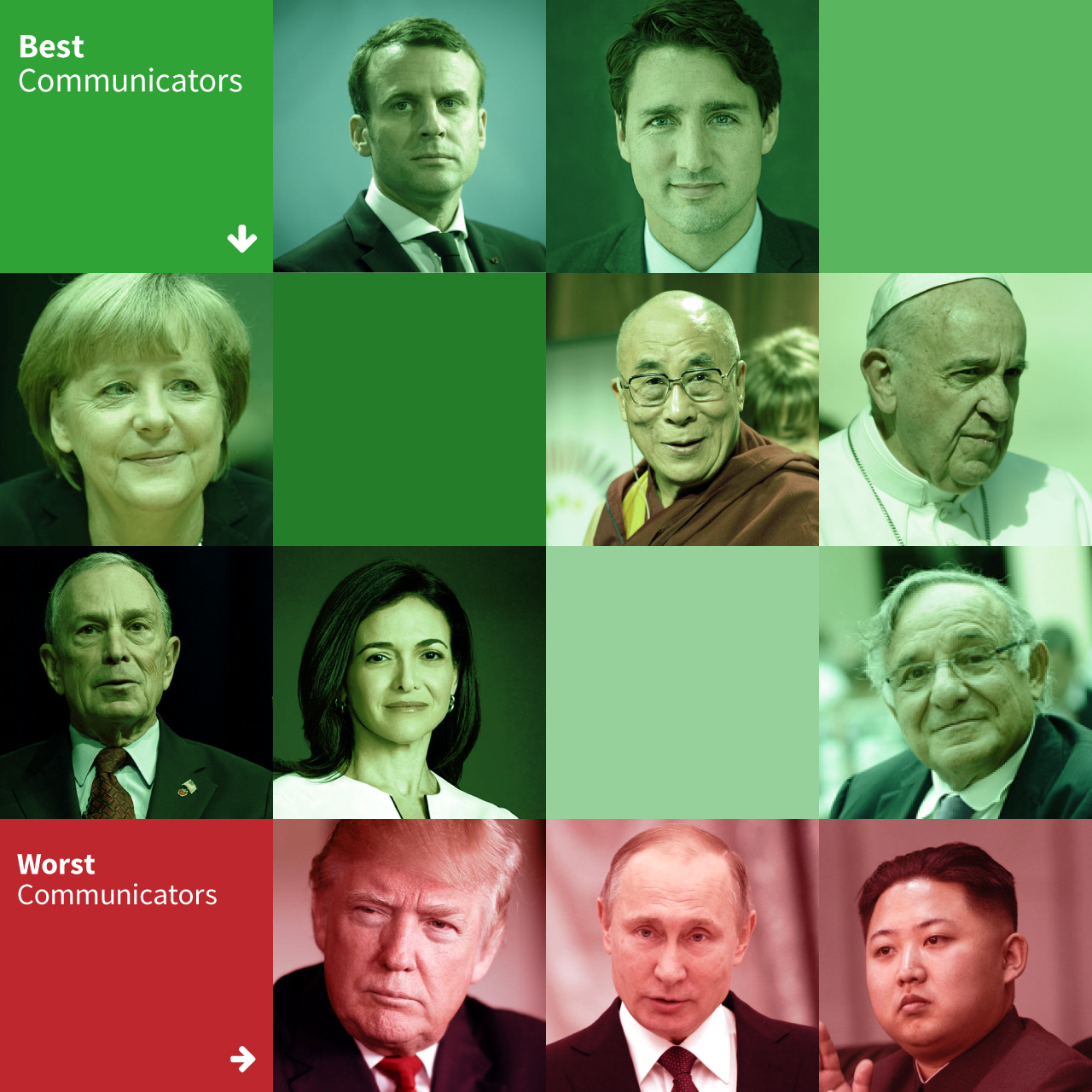 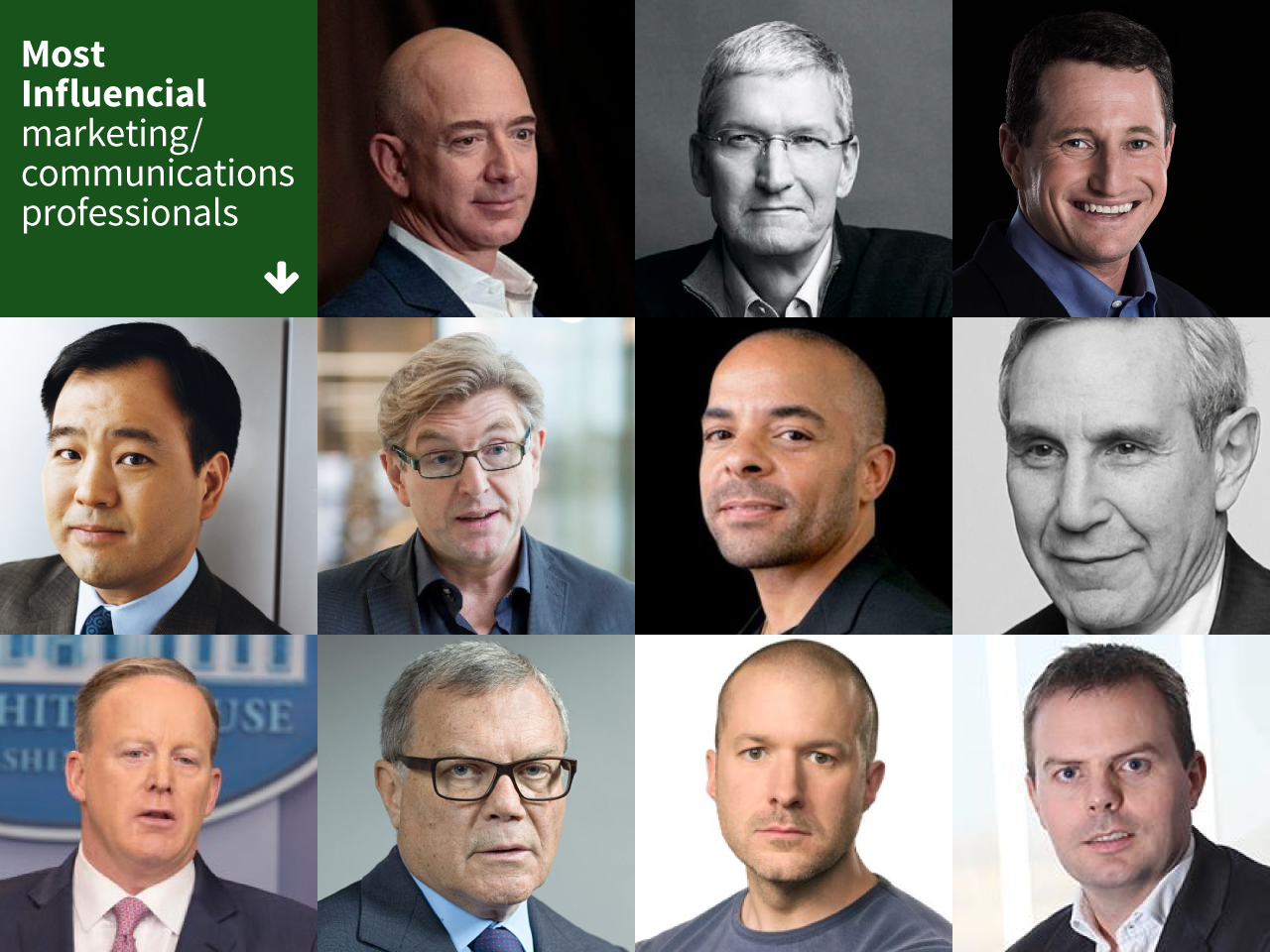 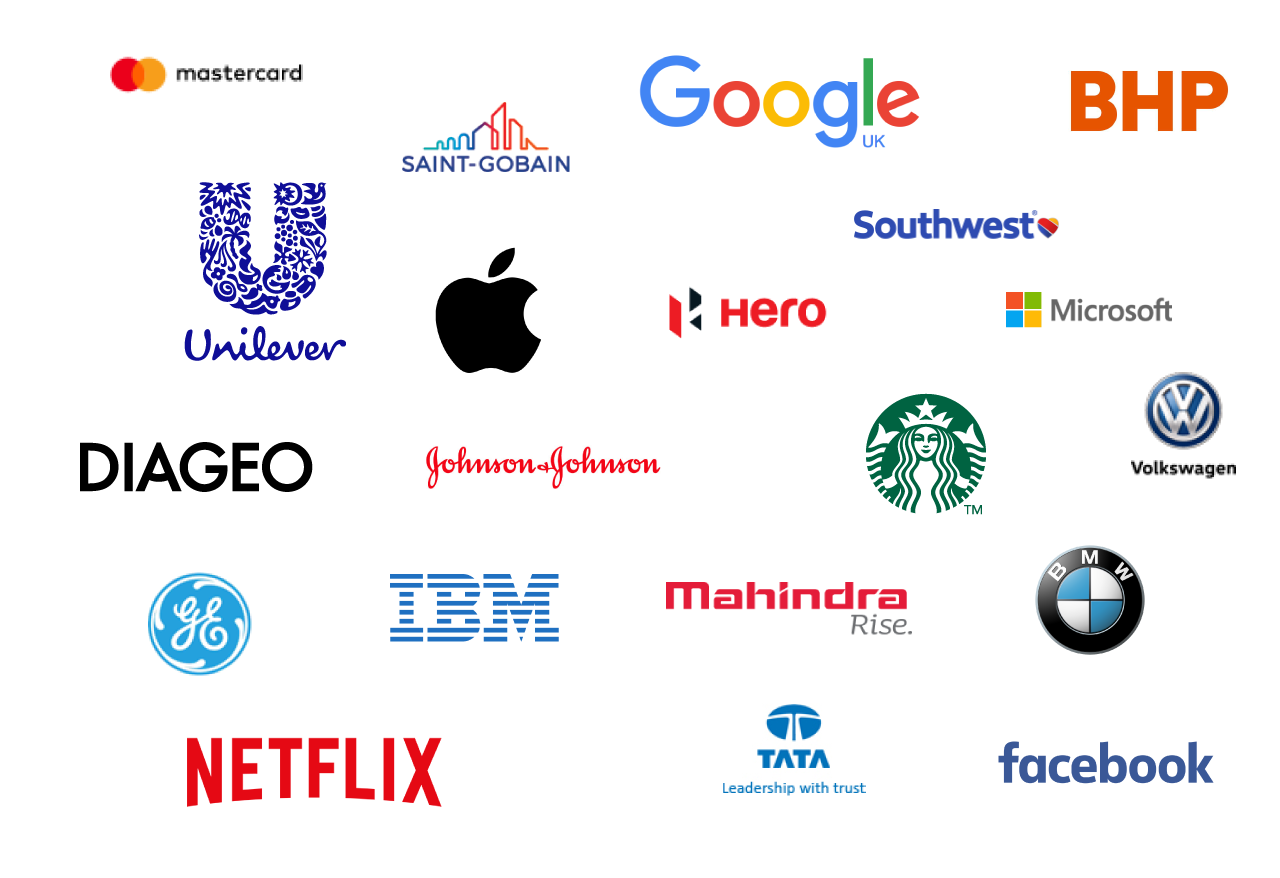 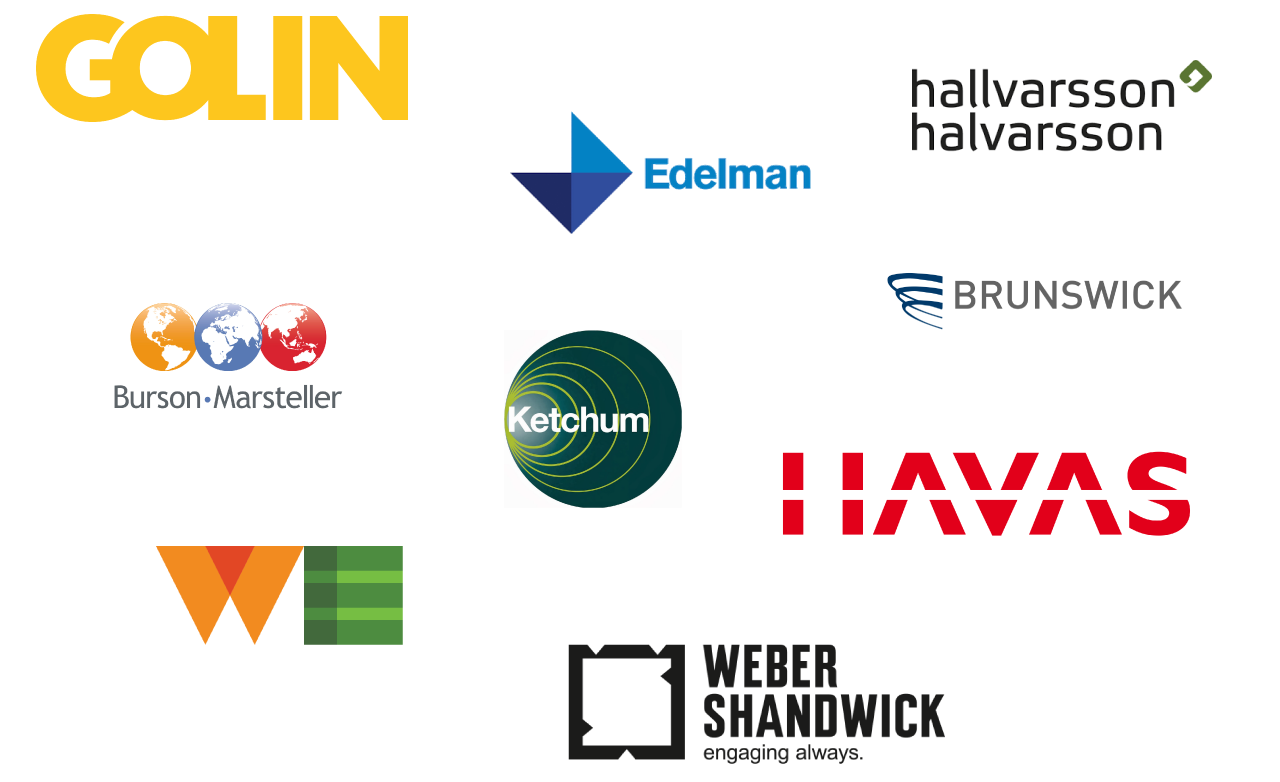 World Leaders & Communicators
For this first time, former US president Barack Obama wasn't named among the most best communicators. When it comes to world leaders, new players Prime Minister of Canada Justin Trudeau and French president Emmanuel Macron emerged as some of the best communicators. Among the most admired communicators from the geopolitical and spiritual sphere were German chancellor Angela Merkel, Pope Francis — who returns to the list after being absent last year — Indian prime minister Narendra Modi and the Dalia Lama made the list. Among other leaders Michael Bloomberg, Sheryl Sandberg and Dr. Ichak Adizes were named.

The most influential marketing/communications list was, once again, dominated by men. Moreover, not a single female in the communications or marketing sector were named among the most influential. IBM's Jon Iwata was listed several times along with WPP head Sir Martin Sorrell and Richard Edelman. Among others listed were Nike's head of global marketing John Slusher, Airbnb CMO Jonathan Mildenhall, McKinsey's Steve John, Unilever's Keith Weed, Tim Cook and Apple's Johnny Ives, and Jeff Bezos. One respondent named Sean Spicer adding that "and that creates lots of challenges for the profession." (The survey was dispatched before Spicer resigned.)

Agencies
Edelman is— for now the fifth year in a row —  the most frequently cited public relations agency when respondents were asked which firm they most admired. Other firms with repeat mentions include Brunswick, WE Communications, Burson-Marsteller, Ketchum and WE Communications. A few respondents lamented about their agency options — "not many are really distinguishing themselves" and "no single agency stands out," they said.