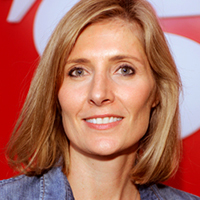 Levi Strauss credits itself as the maker of the “quintessential American garment” — which is, of course, the blue jean. But CEO Chip Bergh (who McGinnis reports to) is the first say “it take more than our strong enduring brands” to succeed. So, Levi Strauss is partnering with Google to design smart clothes and the company is continuing to showcase its sustainability mission, in addition to work being on the forefront social issues.

This is ultimately embodied in the company’s values: empathy, originality, integraity and courage. As Chief Communications Officer, McGinnis is responsible for making sure these are demonstrated in all of the 160-year-old company’s communication touchpoints. More specifically, she oversees corporate media relations, executive, internal and stakeholder communications, government affairs and community affairs.

Previously, McGinnis was the vice president of global communications at Dell. She also held the senior communications position within WPP’s ill-fated agency-built-for-Dell Enfatico (and later, AxiCom). Prior to that, she was general manager of Fleishman-Hillard’s San Francisco office after working with the firm in various capacities in St. Louis and San Antonio. McGinnis recently earned a SABRE Award for Outstanding Individual Achievement.