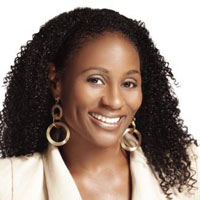 “Every time a woman won, she got compared to men,” Lofton recently said about last summer's Olympics at an event launching Under Armour’s latest campaign Unlike Any. “We had to start thinking about how to change this conversation. Why is there always a framing that when a woman does well, she’s compared to the greatness of a man? We needed to remove gender from the conversation.”

Lofton is already credited as one of the forces behind Under Armour’s breathtaking “I Will What I Want” campaign. Now she’s spearheading the brands newest empowerment campaign that AdWeek already calls “breathtaking.”

It’s this “underdog spirit” that is so powerful and makes Under Armour’s marketing resonate with athletes from all sports — from basketball to boxing to ballet. Lofton has been with Under Armour since 2008, but took a breather from April 2013 to December 2014 to be CMO of the Dockers brand at Levi Strauss. Before Under Armour, she had stints at Target, General Motors and Gap.