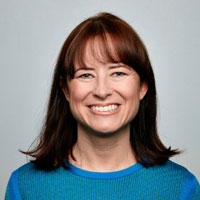 Silicon Valley growing appetite for social good can probably be connected to many things — the implosion of Uber’s toxic culture, stunning revelations of rampant sexual harassment and, probably, the anti-immigrant political climate.

Airbnb is among the companies that has stepped up its social good initiatives, which fall under Rubey’s purview. The rental marketplace recently announced a new site “Open Homes” that lets anyone sign up to offer free short-term space with the aim towards housing 100K refugees over the next five years. The initiative, she has said, resulted from the site inability to offer no-cost housing after Hurricane Sandy.

“Everyone realized immediately that this was a total no-brainer,” Rubey told the San Francisco Chronicle. “Engineers worked around the clock to re-architect the payment system so hosts could offer their listings for free for a discrete period of time.”

On her LinkedIn profile, Rubey calls herself a “results-oriented communications professional” with expertise driving “highly-effective traditional and social media strategies at the corporate level, for political campaigns, and for government agencies.” That trifecta is what Airbnb was hiring when Rubey arrived in November 2011, signaling a shift in the company’s communications strategy.

She joined after the hospitality disrupter took a big hit to its reputation when renters from the site ransacked an Airbnb host’s San Francisco apartment. Since then — like transportation peer Uber — Airbnb’s major battle is making the case for the legality of its service and how to manage taxes and legal liabilities. Rubey’s combined experience in technology and politics likely serves her well in this capacity. She’s worked at Yahoo and eBay, but also for former Senator John Edwards, the Kerry-Edwards campaign 2004, the Gore-Lieberman 2000 campaign, as press secretary for Democratic Congressional Campaign Committee, among other posts within the Democratic party.