Please refer to our Privacy Policy for important information on the use of cookies. By continuing to use this website, you agree to this.
Home Rankings & Data Influence 100 The Influence 100 2019 Insights: Teams, Budgets & Agencies

There's a big leap in the number of CMOs and CCOs reporting into the chief executive or chair of their organisation this year: 74%, up from 64% last year. Oversight by the chief marketing officer dipped from 14% to 8%, with the remainder of our cohort reporting into various functions, including the chief operations officer, chief finance officer, and VPs or SVPs of corporate/public affairs. 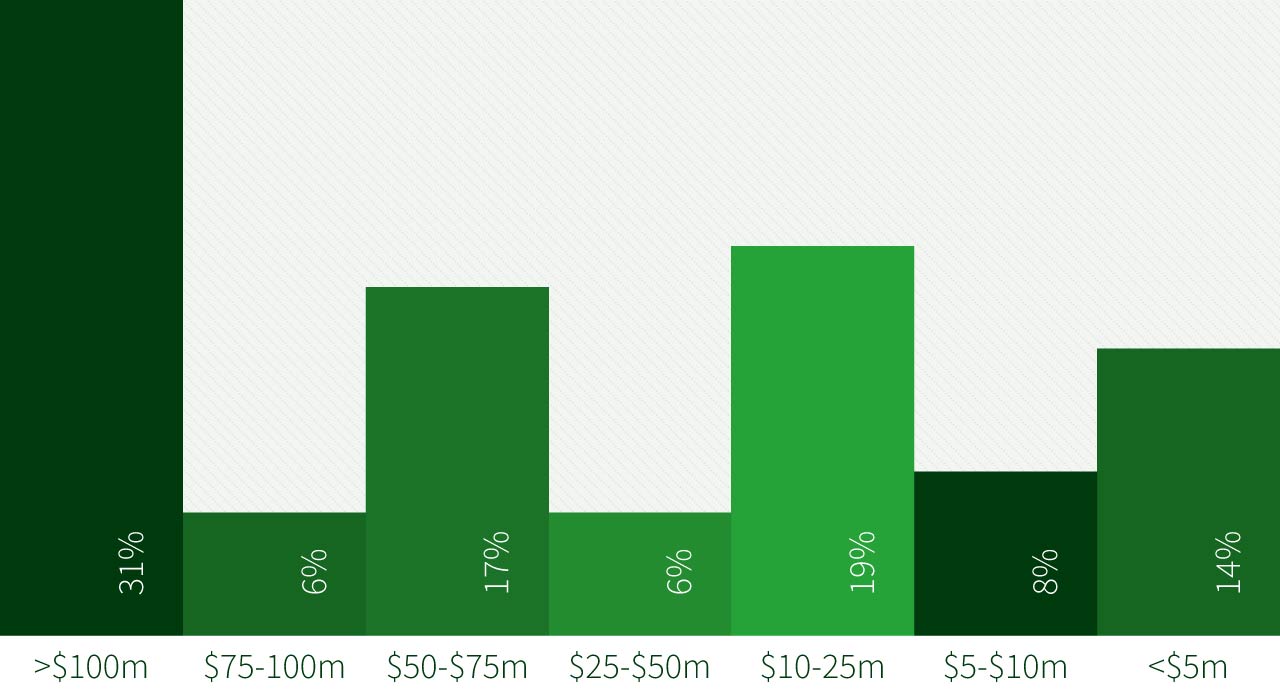 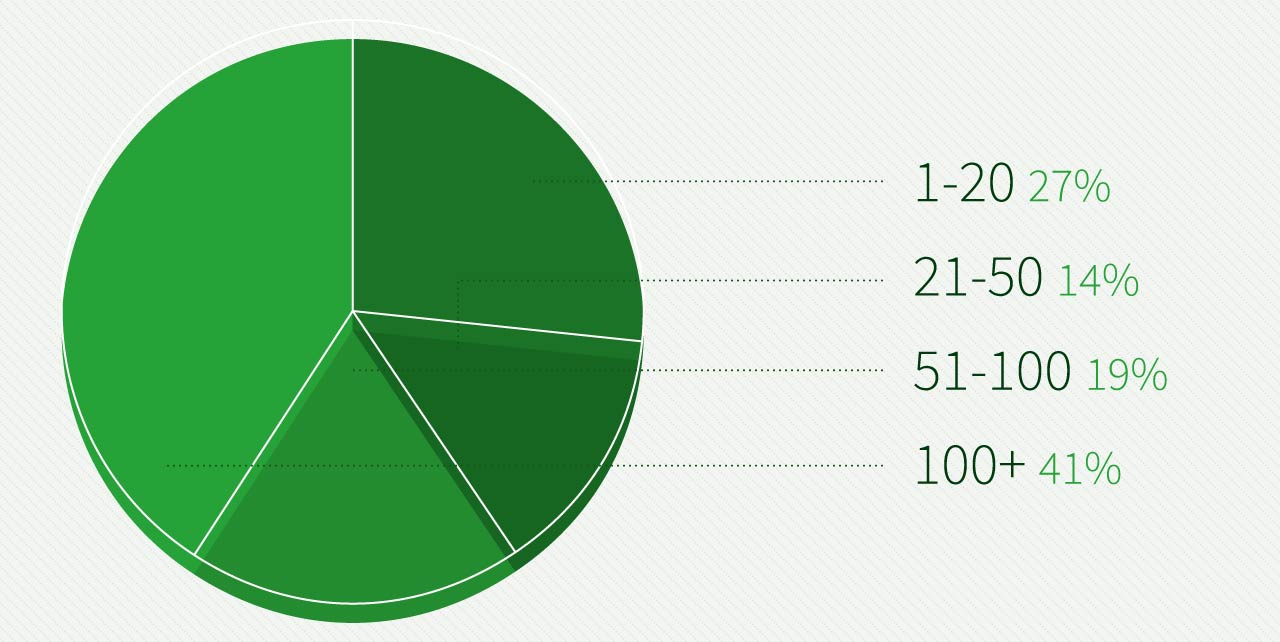 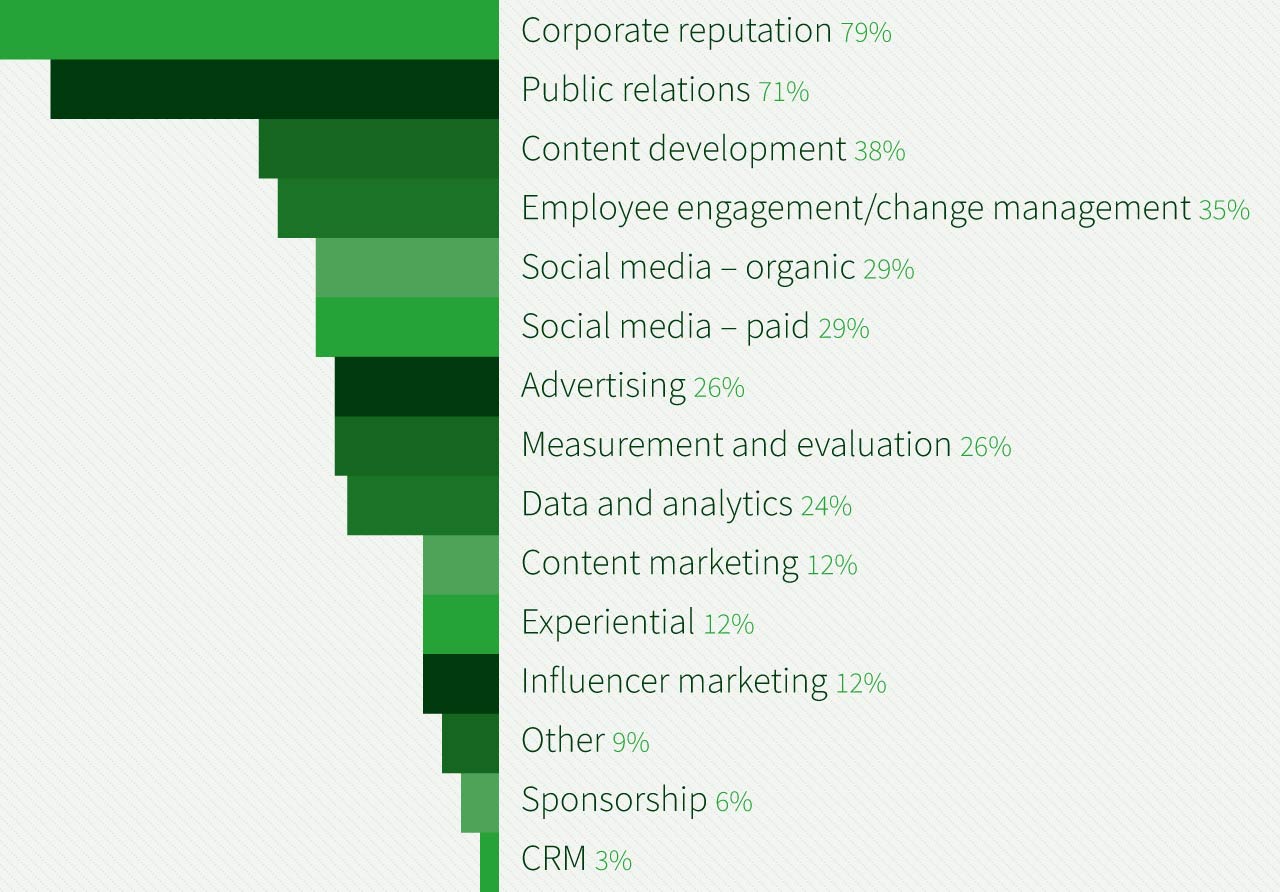 PR budgets are enjoying something of a spike: after years of freefall in the numbers of our CMOs and CCOs who were managing budgets of more than $100m – from 50% in 2015 down to 11% last year – this year it’s back up to 31%.

Most respondents said budgets had stayed flat compared with the previous year, although budget increases of between 5% and 30% were cited. Some disclosed they had seen budget cuts of 10%, 20% and even 30% this year.

The number who manage teams of more than 100 people rose slightly from 38% to 41% this year, and the majority are managing teams of 50 or less. There was huge variety in the extent of team flux: while most reported their teams had stayed the same size, there were plenty of respondents where headcount had increased by 10%, 20% or even doubled, with very few respondents saying their team had shrunk compared to 2018.

PR budgets include a wider range of activities than ever. The areas that have swallowed up most spend this year and are anticipated to be major areas of spend next year include corporate reputation, where 79% of respondents said this would be the area where they would spend most, and traditional public relations (71%, up from 65% last year). Other areas of note were content development, where there was a drop in the number who said this was a spending priority, from 54% to 38%, and the new category of employee engagement and change management, which will be a major area of spend for 35% of respondents.

In terms of social media spend, 29% said they expected to spend most of their budget on paid social, up from 19% last year, while the number who said they would be spending most on organic social dropped from 41% to 29%. Predicted spend on measurement and evaluation was down, with only 26% saying this was a priority, compared to 38% last year. And influencers are also not such a priority, with only 12% saying they would get a hefty slice of the budget, compared to 19% in 2018.

The Influence of our 100 this year again ranges much further than public relations, in terms of being primary decision makers for hiring agencies beyond PR firms, although to a lesser extent than in 2018. This year, 53% of respondents were the primary decision-maker for digital/social agencies (down from 64% last year and 79% in 2017) and 36% said the same of advertising agencies, up significantly from 28% last year. Other agencies managed by our cohort included experiential, financial and public affairs specialists, market research, content, and internal communications.

Agency spend appears to be up, with 11% spending more than $30m on their PR agency partners, compared to just 3% last year. More than a third (34%) of respondents spend between $10m and $30m on PR agencies. At the lower end, the number of respondents spending less than $1m was down slightly from 20% to 17%.

Only 6% of CMOs and CCOs say they have one global PR agency of record, around the same as last year. The number who said they have a global AOR, but also work with other firms rose again to 40%, from 35%, and there was also a rise in those who have separate agencies in each market, from 11% to 17%. But it seems that the trend for selecting firms on a project basis is no longer rising, with only 23% saying this was their preferred way of working with agencies, compared to 38% last year. 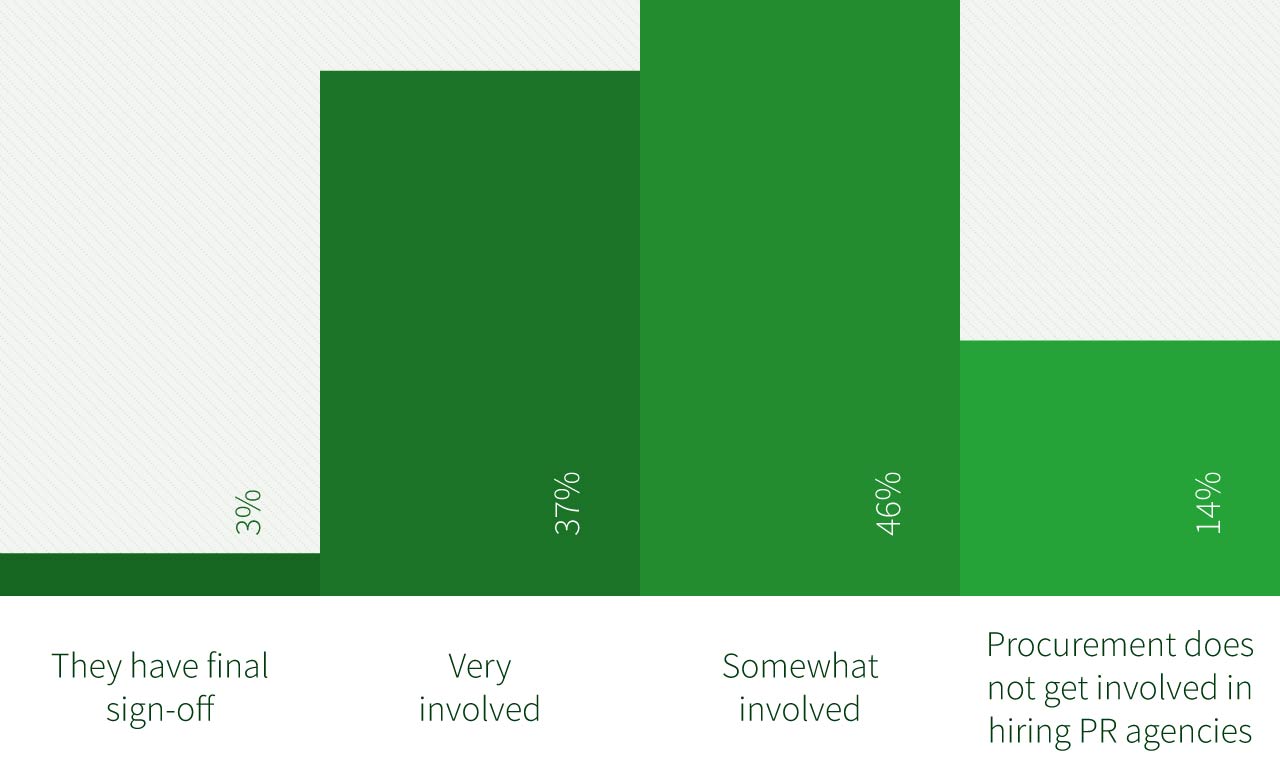 There has been a shift in the perceived value that agencies bring to their clients this year, with 36% saying creative thinking and new ideas were the greatest benefit of working with an agency, up from 27% last year. It’s all about tactical execution for 43% of CMOs and CCOs (up from 17% in 2016, for comparison) however, and strategic counsel and direction was also down even further to 13%, compared to 40% in 2016.

After a big drop last year in the number of our influencers preferring to hire an agency via an invitation-only pitch, from 63% in 2017 to 34%, this year it’s back to being the preferred process for 50% of respondents. The number of those who prefer to run a traditional RFI/RFP pitch process was up again, from 34% to 37.5%. The number of respondents who prefer to hire an agency they have previously worked with is stable at just 3%, but after last year’s spike in those opting to use a referral network (29%, compared to 7% in 2017) this is now back down to 9%.

There’s much talk about procurement’s increasing involvement in the pitch process, so we again asked our in-house influencers what role the procurement function in their organisation played in the hiring of PR agencies. The number who confirmed that procurement was somewhat or very involved was up from 79% to 83%, and those who said the procurement was not at all involved in pitches dropped from 18% to 14%. A steady 3% said procurement has the final sign-off on agency hire.

To what extent are the different marketing and communications functions in your business integrated?

With integration still a major theme for the industry, we again asked our influencers about the extent to which marketing and communications functions in their business are now integrated, and their expectations of their PR agencies in terms of offering an integrated service. A similar number to last year – 39% – said there was full integration of marketing and comms disciplines within their organisations, while the number saying there was partial integration was down from 55% to 42%. The number of respondents saying they still operated completely separate silos was up from 5% to 11%.

Comments from individuals on how their functions were integrated included: “Our agile operating structure gives a good degree of autonomy to functions, but with strong cross-collaboration encouraged"; “We are divided between corporate and product marketing”; and “separate but fully working together.”

And integration within in-house departments appears to be working: 53% said taking an integrated approach had had a positive impact on corporate reputation, while 36% said that in addition to reputation, they had also seen a positive impact on revenue and deal acceleration. One respondent added that they had seen “actual business impact, including better policies” as a result of integration.

It’s no surprise, then, that PR agencies are required to mirror this integration: 66% of CMOs and CCOs said they now require full integration from their agencies, up from 57% last year. At the same time, 63% of clients are still expecting their PR agencies to be specialists in that discipline.