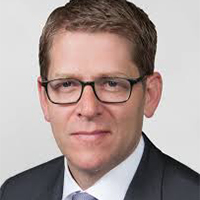 Highlights of Carney’s tenure include his help playing matchmaker in one of the most fascinating and consequential business deals of 2017: Amazon's purchase of Whole Foods. When, less than a year into his tenure the New York Times published a somewhat epic takedown of Amazon’s work culture, Carney took the unprecedented step of publishing his response, “What The New York Times Didn’t Tell You.” on Medium. The New Yorker, among other publications, analyzed his response and what this ultimately means for the balance of power between journalists and corporate spokespeople.