Intro & Methodology | Profiles | Demographics & Background | Teams, Budgets & Agencies | Challenges, Diversity & Influencers |  Inspiration & Most Admired | Crossover Stars | Rising StarsThe following data is based on responses from a survey sent to this year's Influence 100, and where applicable, further analysis. Some percentages might not equal exactly 100% due to rounding. 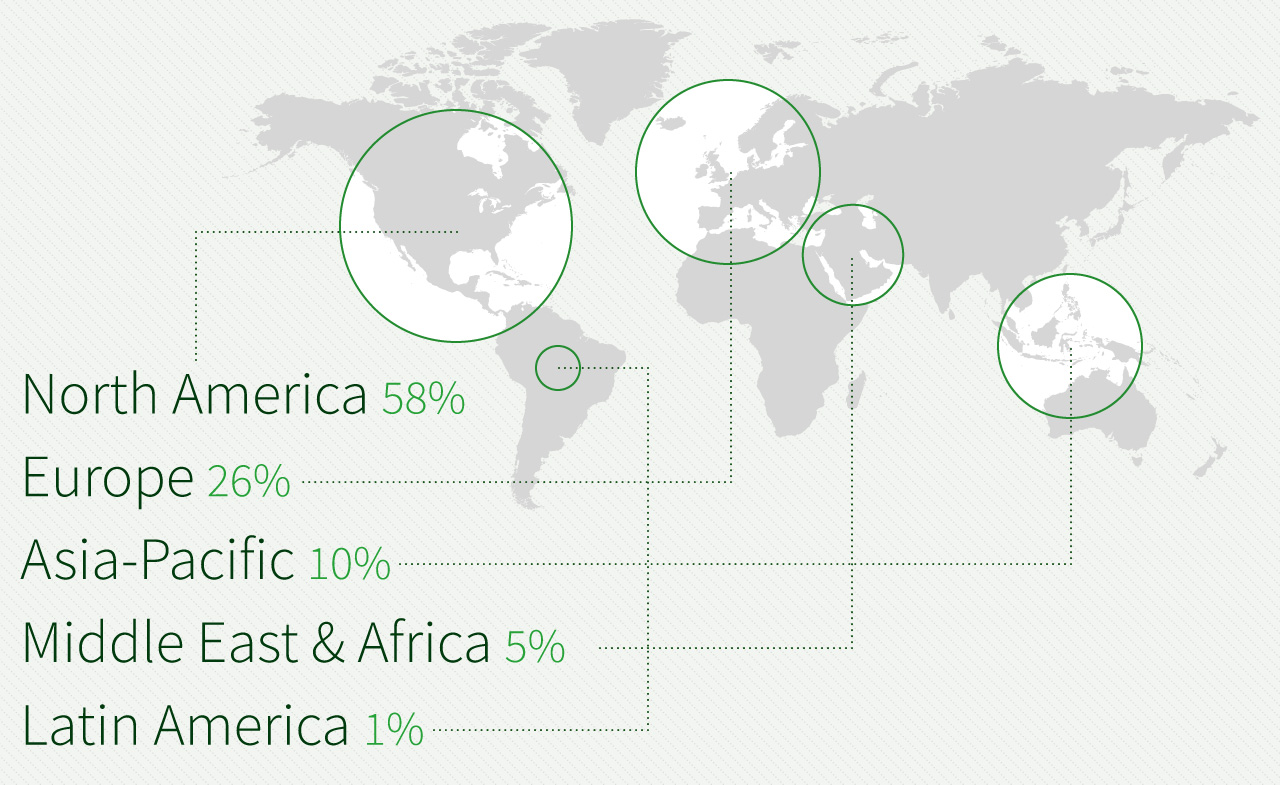 There are 29 new entrants in this year’s Influence 100, due to factors including job changes (several of last year’s influencers have left their roles) and the rise of various executives, companies and industries. Of those, 16 are brand new entrants in terms of both individual and company, while 13 work for companies that were in last year’s ranking but they themselves have not featured before in their current roles.

Unsurprisingly, the influence of North America has remained dominant, with 58 influencers from this region (the same as last year). Meanwhile, 31% come from EMEA, 10% from Asia-Pacific (as last year) and only 1% from Latin America again this year. 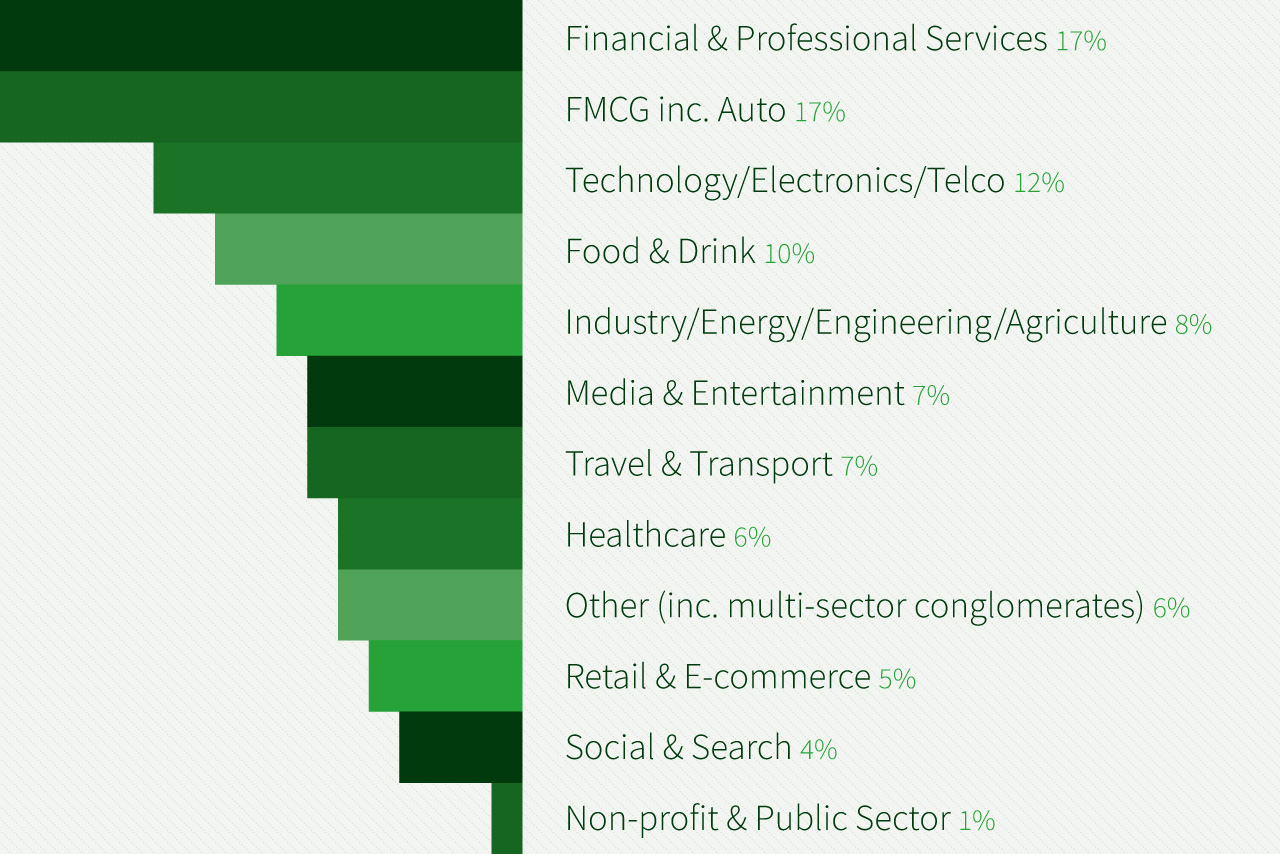 With practically every company now a technology company to a greater or lesser extent, breaking down the Influence 100 by sector has become increasingly complex. We refreshed all our categories last year to focus on what the organisations our influencers work for actually do or sell, not how they do it or whether their audience is consumer or B2B. So, for example, Amazon is a retailer, Uber is a transport firm, and Paypal is a financial services company.

Our categories split out mainly consumer-facing brands, including putting FMCG and automotive together but separating out food and drink, and media and entertainment. Our ‘social and search’ category includes Google, Facebook and LinkedIn, rather than putting them in with technology. Meanwhile, the technology category is old-school: traditional hardware and software companies, plus electronics and telecoms.

The split between sectors is more or less the same as last year. There was a slight lift in presence for FMCG, food and drink, multi-sector conglomerates, and social and search, and a dip in the number of industrial and energy, retail/e-commerce, healthcare and public sector organisations in the listing.

We’re close, for the first time, to achieving gender balance in the Influence 100, with 47 women and 53 men, leaping up from 38 women last year.

In addition, three women remain in the list, but in new, equally high-profile roles this year: Michelle Russo moved from Discovery to the US Chamber of Commerce in March 2019; Rachel Whetstone moved from Facebook to Netflix in August 2018; and Kaisa Lipponen moved from energy supplier Neste to Finnish food and drink company Paulig this summer.

Our Influence 100 communicators and marketers have worked for their current company for an average of 8.7 years, a little down on last year’s average tenure of 9.3 years. This was down to high-profile job changes for long-standing employees, such as Saudi Aramco’s Nasser Al-Nafisee, who had been with the oil firm for 47 years, latterly as VP corporate affairs, and American Express’ Mike O’Neill, who retired after being with the company for 27 years.

There’s a bigger split between long-stayers and fresh players in the listing this year: 13% of the cohort have been with their employer for 20 years or more, the same as last year, but 26% have been with their current company for less than two years, also compared with 13% in 2018.

Was communications your first career?

If not, what was your first career?

In terms of the most popular subjects for study, there was a clear bias towards communications degrees, but many more influencers than last year said they had a MBA or other business qualification, as well as politics and political science, and journalism. This year, there were surprisingly few English graduates, and only a scattering of languages, history and drama students, while there were multiple responses for economics, law and psychology.

In a change to last year, many more of our cohort did not start their career in communications. Compared to 59% last year who said their first job was in PR or marketing, this year only 45% said this was the case. Predictably, of these, journalism was the most common previous career, up from 32% last year to 39% this year. There were many fewer CCOs and CMOs coming through the politics route this year (9%, down from 26%), and there was a new category of those who started life as financial analysts: 13%. A sales background was shared by 17% of those who didn’t start out in comms, and 9% were originally management consultants. There were also some more unexpected responses, including stints in the military, law and coming up through the ranks after starting as an executive assistant.

Many more of our influencers have not taken the agency route to an in-house career: 57.5% said they had worked in agency, compared to 65% last year. Among those, most (45%) had spent more than ten years working agency-side, a marked leap from last year when this length of tenure only accounted for 28% of former agency staffers.