The following research is based on a survey of those selected for inclusion in this year’s Influence 100 and our own analysis and research.

The 100
Geography
The world’s 100 most influential corporate communicators is a diverse group. Compared to last year, there are 22 new entrants in this year’s compilation. This is down to a variety of factors, including job changes (several of last year’s Influence 100 have left their roles) and the rise of certain executives, companies, industries and regions. Unsurprisingly, given the size and stature of the US public relations industry, 50 of them are based in North America (compared to 48 in 2013), with a further 12 located in the UK. The remainder are spread across 23 countries around the world, including Brazil, China, India, Indonesia, Japan, Korea, Russia, Singapore, South Africa, Saudi Arabia and the UAE as well as all of the major markets in Western Europe. 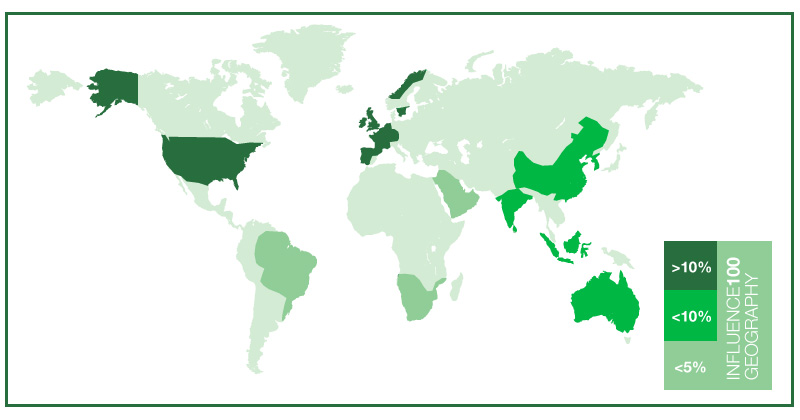 Sectors
They represent a wide range of industries — technology, automotive and aviation, e-commerce, healthcare, mining and manufacturing, retailing, food and beverage — as well as public sector organizations such as the White House and EU. 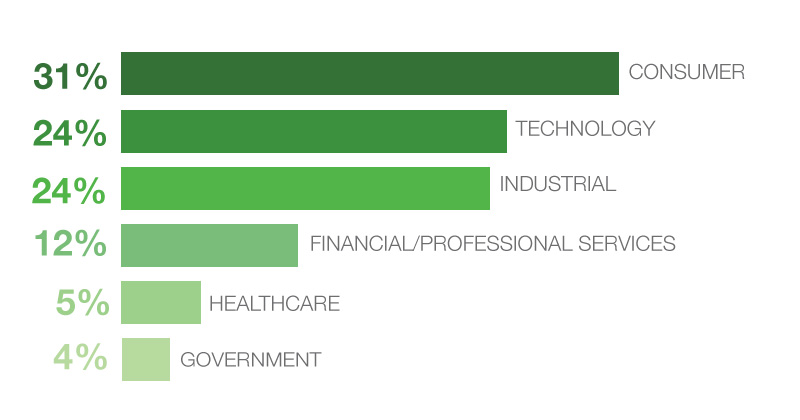 Tenure
The tenure of Influence 100 communicators is, on average, 9.5 years. Nineteen percent have been with their companies for less than three years. McDonald’s Robert Gibbs, Amazon’s Jay Carney, Shire’s Michele Galen and Uber’s Rachel Whetstone stepped into their new roles this year.

Gender
Like the agency side of the business, we found a considerable gender disparity among those who hold the top communications role at many of the most influential companies around the world. Only 33% are women, meanwhile 67% were men. It is estimated that 70% of the PR workforce is made up of women. 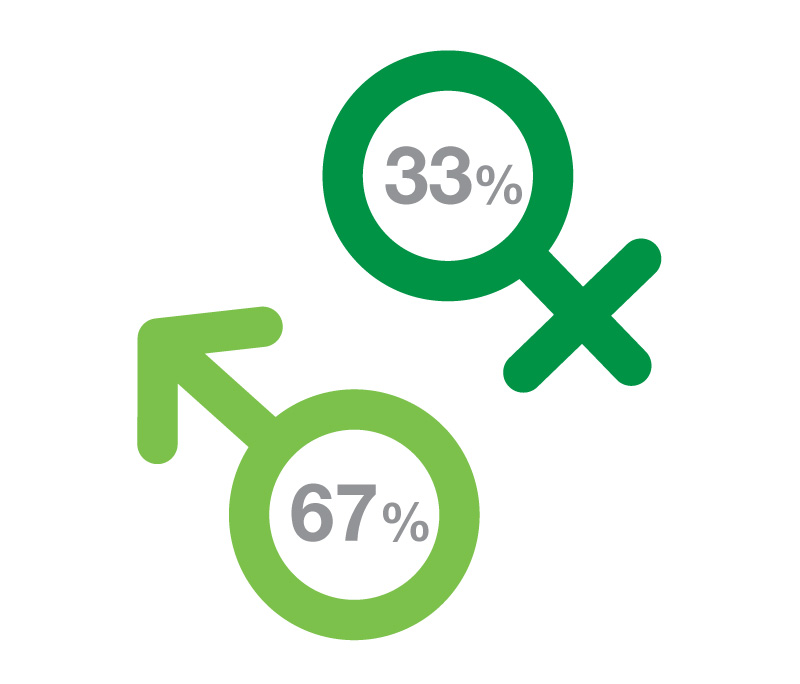 The Budget
Slightly less than one-third (27%) report they oversee total PR budgets greater than $100m — down from exactly 50% in the previous year. About 11% peg their budget between $75m and $100m and the same number report budgets in the $50m to $75m range. About one-third oversee budgets between $10m and $50m, meanwhile 11% report a budget between $5m and $10m and the remaining (5.6%) report less than $5m. This means the 100 most influential corporate communicators in the world are likely responsible for budgets well in excess of one billion dollars.

Slightly more than 40% said their budgets increased last year. Slightly more than one-third reported a contracting budget and nearly a quarter had budgets that remained flat. A staggering 71% expect to increase their spend on content development and marketing this year — a striking contrast to 2013 when 80% expected to spend more on social media. This year, only 67% reported to grow their social media spend. Just shy of 50% expect to up their spend on PR/corporate reputation, 38% look to add resources to digital marketing and analytics respectively. Other investment areas: advertising (24%), experiential (19%), sponsorship (14.3%) and CRM (5%). 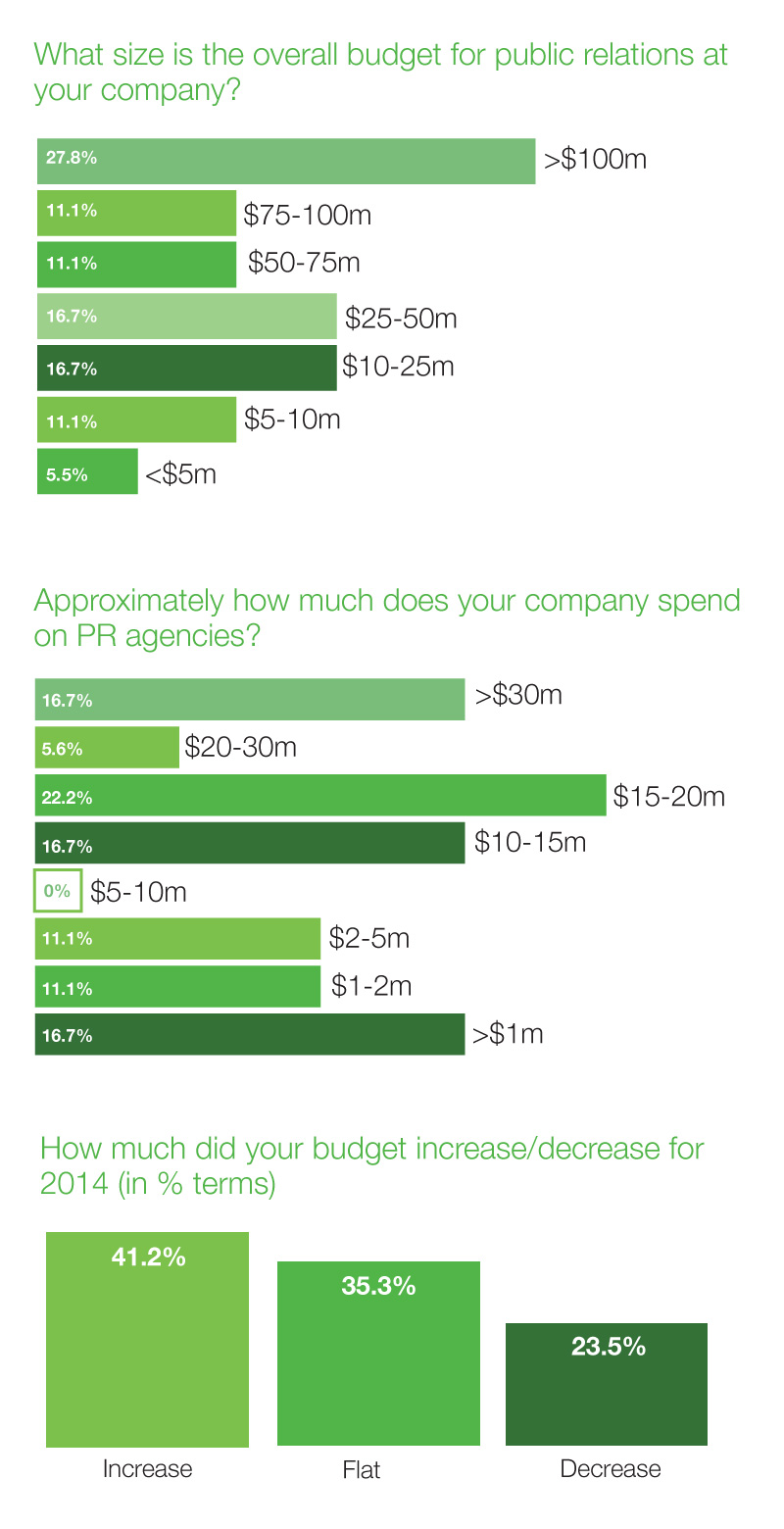 The Agencies
Unsurprisingly, 100% of those responding to our survey reported they were the individual primarily responsible for hiring and firing public relations firms.

And once again, many of them reported that they were a primary decision maker when it came to other external communications spending: 70% play a key role in hiring digital and social media firms (on par with last year); 45% play a role in sponsorship decisions (down from from 57%); 65% have a role in hiring event management companies (up from 52%); meanwhile 40% (down from 48%) are the primary decision maker when it comes to hiring advertising agencies.

Only 5% work with just one global agency of record — on par with last year. Nearly one-third (32%) enlist a global AOR, plus other support agencies. About one-in-four opt to have regional AORs, just north of one-quarter select agencies based on market and 16% work with agencies on project basis — down significantly from last year (35%).

The majority (55%) prefer to hire their agency through an invitation-only pitch, meanwhile sticking with a previous agency and going through an RFI/RFP process each nabbed 20%. Only 5% prefer to rely on referrals.

Perhaps refreshingly, 43% rely on their agencies for idea generation — and nearly one-quarter look to their partners for strategic counsel and direction. Twenty-eight percent are looking for tactical support and just 5% report geographic coverage as their primary driver for enlisting agencies.

The Inspiration
Favorite Brands
Asked to identify companies—other than their own—that managed brand communications effectively, there were some striking changes from last year. Apple, IBM and Disney re-emerged after being notably absent last year. Unilever, BMW, Volkswagen and Coca-Cola appeared once again. Also on the list this year: GE, Google, Nike, Burberry and Virgin America. 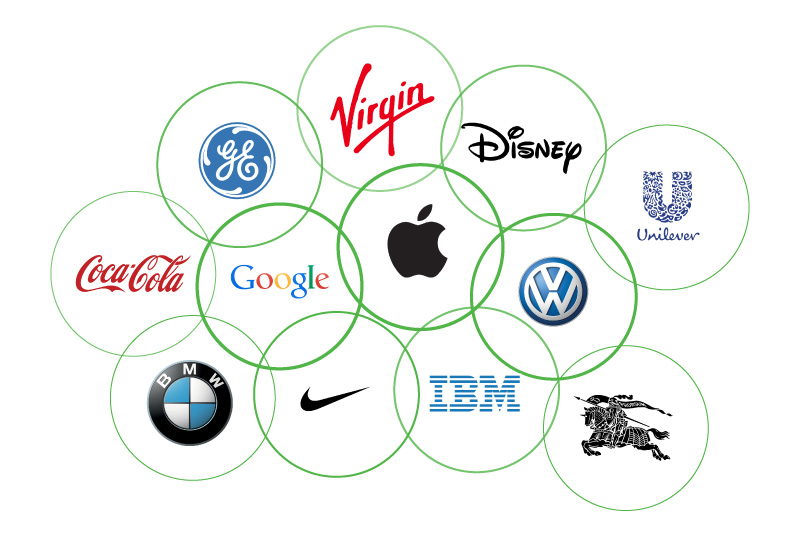 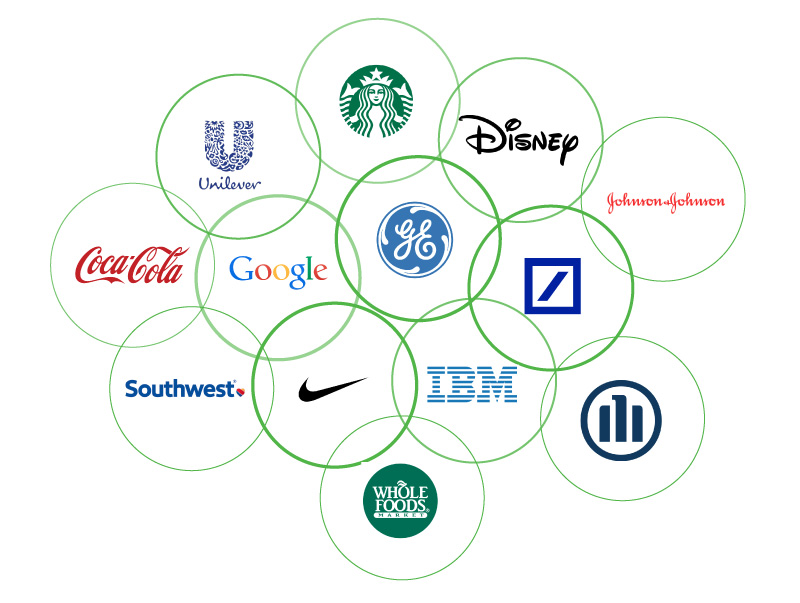 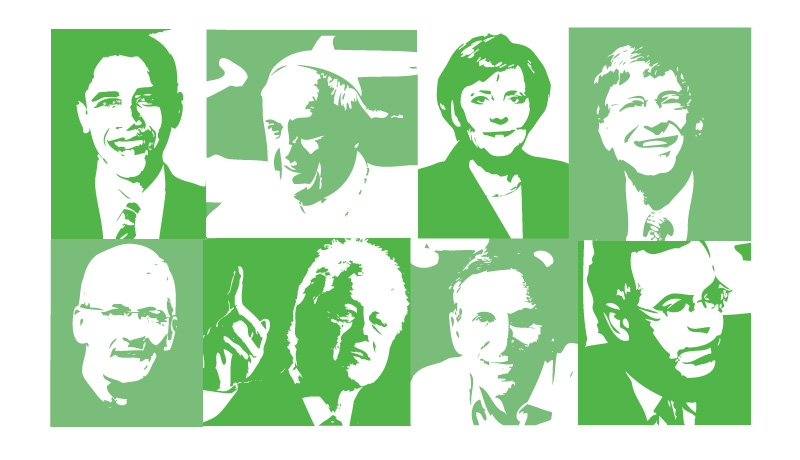 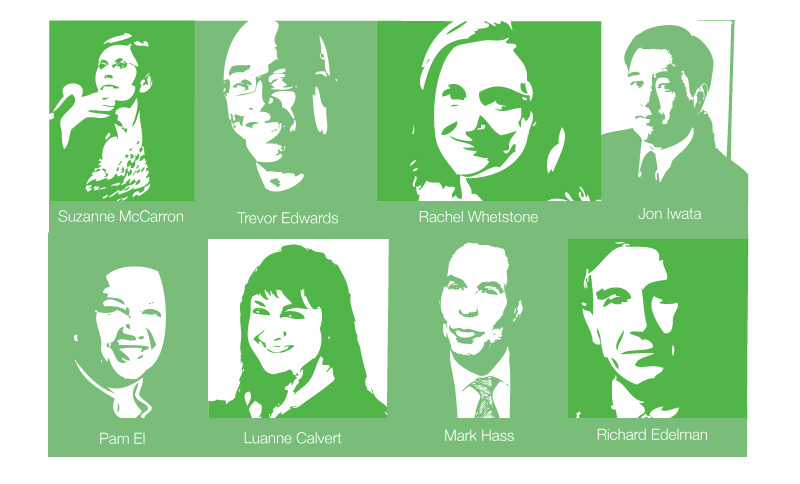 Edelman was — for three years in a row —  the most frequently cited public relations agency when respondents were asked which firm they most admired. Burson-Marsteller was also mentioned more than once. The only other global, multi-service firms to make the cut was Weber Shandwick and the WPP network (while FleishmanHillard and Hill + Knowlton made the list last year, they did not appear this year). Brunswick, FTI, the OutCast Agency, Portland and Glover Park. 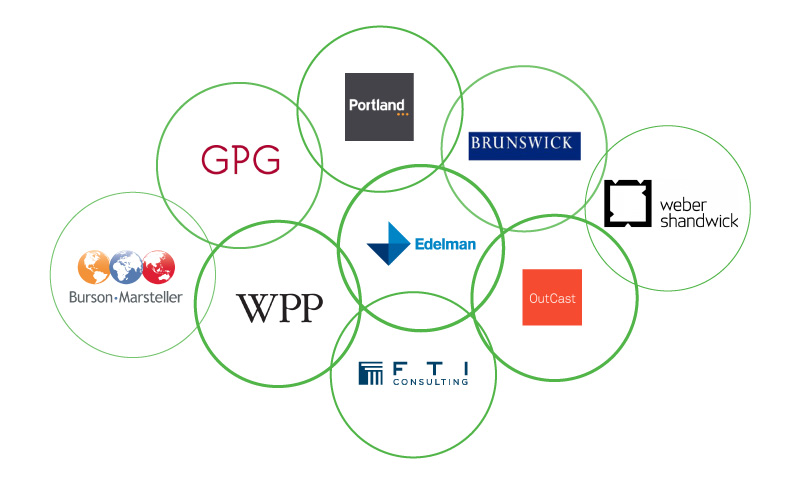 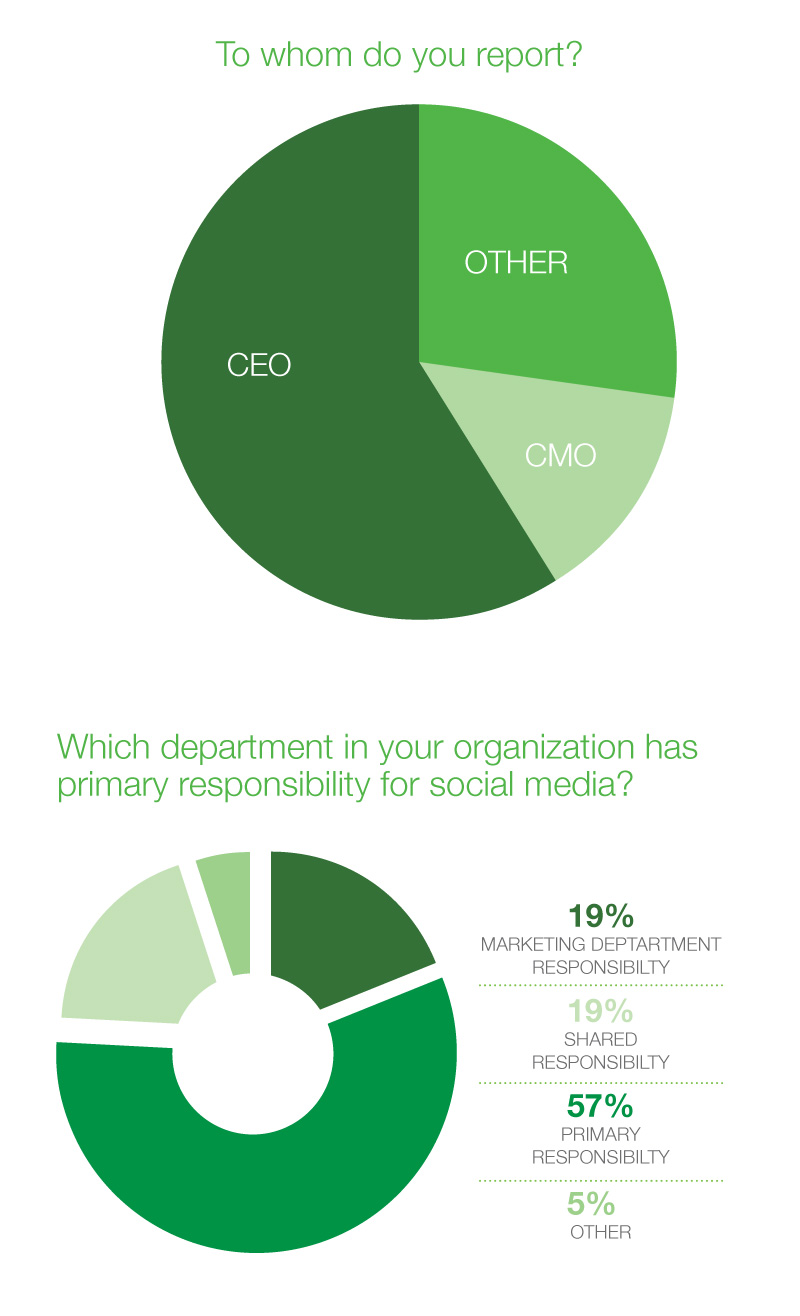 The Team
Sixty-five percent of respondents manage teams of more than 100 people, while one-quarter manages teams between 21 to 100. Ten percent of the respondents oversee teams of 20 or less. The agency hiring craze also seems to apply in-house: half of respondents increased their team last year; 44% remained flat and only 6% lowered headcount.

The Early Days
Education & First Career
Based on a survey of those selected for inclusion in this year’s Influence 100, 57% have advanced education beyond a bachelor’s degree. Journalism and communications were the most popular field of study, followed by political science, business and the liberal arts. The Influence 100 also includes individuals with degrees in law and the sciences, among others. About 40% selected public relations as their first career — up from about 30% in the same survey in 2013 and 48% in 2012. 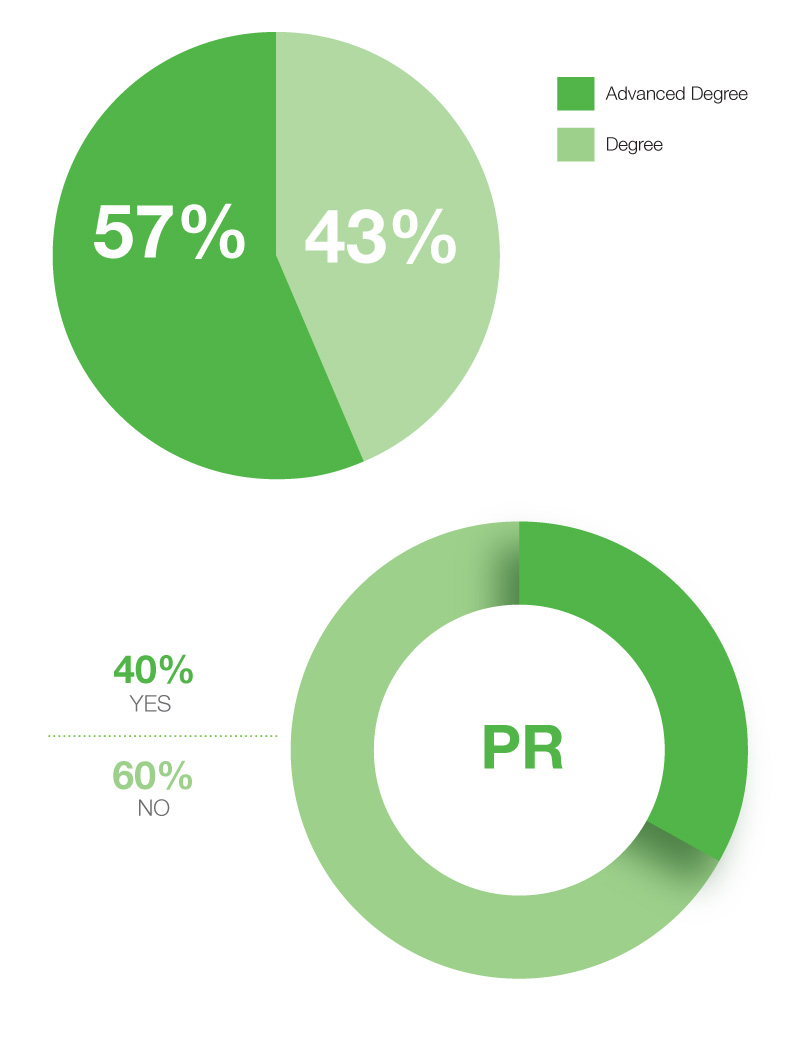 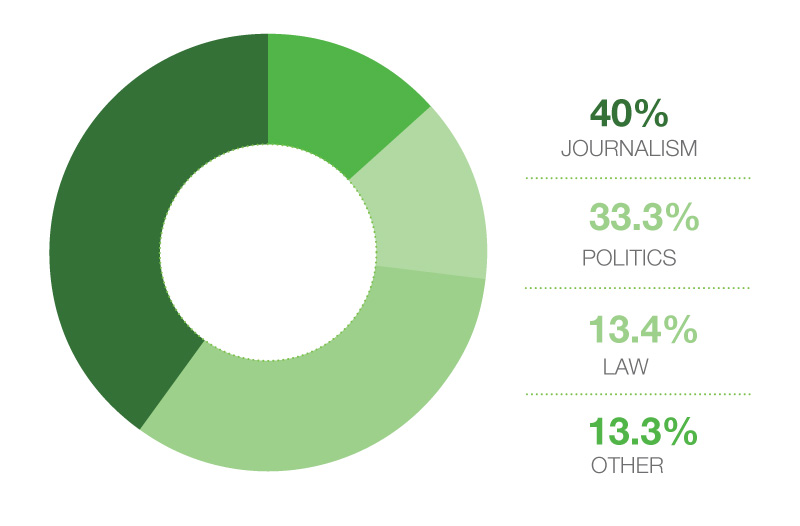