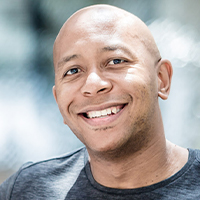 Before joining Vodacom in 2017 to oversee the brand across South Africa, Lesotho, Mozambique, Tanzania and the Democratic Republic of the Congo, Abey Mokgwatsane was CEO of Ogilvy & Mather South Africa for five years, where he drove the agency’s digital integration, including acquiring Gloo Digital.

Known as a transformative leader, he is already helping to enhance Vodacom’s digital positioning. It’s not the first time Mokgwatsane has been in-house: he was also a brand manager at South African Breweries (SAB) and brand group manager for Miller Genuine Draft, widely credited with the successful launch of the brand into the South African market.