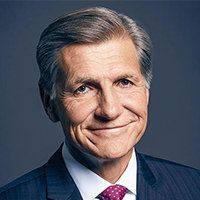 Marc Pritchard may not be a PR practitioner by trade, but as P&G’s global marketing chief he oversees one of the world’s largest public relations budgets, and one of its smartest PR operations. He has also been a bullish advocate for the industry, telling attendees at last year’s PRovoke18 that “PR’s time has come” and calling on the industry to take the lead on “reinventing citizenship from brands that are “all about me” to brands as a force for good and a force for growth."

Accordingly, Pritchard has also helped P&G fine tune its measurement and remuneration systems to better reflect the role PR plays in its campaigns and has ensured that P&G’s PR agencies have a genuine, coveted, spot at the top-table of strategic brand planning. Pritchard has also overseen the landmark integration of the company’s marketing and communications capabilities, which saw its entire public relations operation consolidate under his leadership.

A 35-year veteran of P&G, Pritchard’s uniquely integrated role—he oversees all brand-building functions, including design and public relations—make him arguably the most powerful figure in the marketing world. Accordingly, efforts to rationalize P&G’s agency roster, which has seen it whittle down the PR firms it works with in favour of five global partners, has sparked unprecedented industry interest.