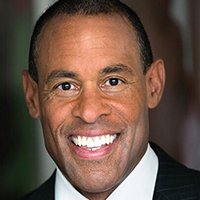 No company in America has a tradition of public relations excellence to match pharmaceutical giant Johnson & Johnson, which is best known for its textbook crisis response to the Tylenol tragedy and a values-based credo that has always elevated stakeholder relations to a key function at the company.

Michael Sneed now has primary responsibility for the company’s global marketing, communication, design and philanthropy functions, taking on the role in 2012, at a time when the company was recovering from a series of product recalls and other hits to its reputation. In the years since, he has dealt with a number of crises—most recently, allegations about the company’s role in the opioid crisis.

Sneed joined Johnson & Johnson in 1983 as a marketing assistant for its personal products business and moved to McNeil Consumer Products, where he served as vice president, worldwide consumer pharmaceuticals, leading the company’s growth in the Asia Pacific, Eastern European and Latin American regions. He then relocated to Europe as managing director, McNeil Consumer Nutritionals Europe before returning to the US as president, McNeil Nutritionals Worldwide, in 2000. In 2007, he moved to J&J’s medical device and diagnostic sector as company group chairman before assuming responsibility for J&J’s brand and reputation.