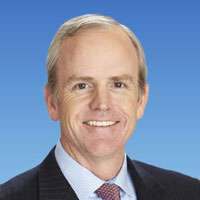 With the departure of Leslie Dach, who transformed Walmart’s the corporate communications function within Walmart as well as the company’s response to external criticisms, the Arkansas retail giant clearly needed another heavy hitter to fill his shoes. It found one in Dan Bartlett, who took the reins of the corporate affairs department in June of 2013 and over the past two years has built on his success, most recently handling the announcement that the company was raising its minimum wage, now 24 percent higher than the statutory minimum. Over the past year, he also managed the announcement and communications strategy around Walmart’s 2016 acquisition of Jet.com.

Bartlett reports to Mike Duke, Walmart’s president and CEO, and serves as a member of the company’s executive council. His responsibilities include oversight of external communications, government relations and sustainability, as well as the Walmart Foundation, which contributed more than $1 billion in cash and in-kind donations last year.

What are the industry's biggest challenges and opportunities?
Reaching people where they are, in the way they want to be reached.

How do you relax?
With my family.