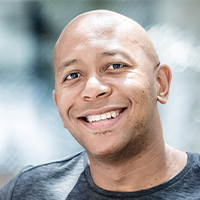 A former CEO of Ogilvy & Mather South Africa, Abey Mokgwatsane was appointed CMO of Anglo-South African banking and wealth management group Investec in October 2021. Prior to this he was managing executive for brand marketing and communications at Vodacom, Africa’s largest telecommunications provider.

Known as a transformative leader, during his time at Vodacom he helped to enhance the brand’s digital positioning, with a heavy emphasis on purpose—a personal priority.

Of his move to Investec, which he described as a ‘once in a lifetime opportunity’, he said: ‘I look forward to evolving what it means to be ‘out of the ordinary’.’