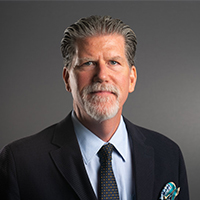 That mandate gives Lott more insight than most into the role business must play in society. As he told PRovoke Media in Davos last year, "For years, communicators have been reflecting concerns of broader society, that companies need to look beyond profit and address larger social disruptions and how they can best use the power of their brands to make the world better."

Beyond Mubadala, Lott has served as chair of the Middle East Public Relations Association, helping define the organization’s mission and vision and spearheading its contribution to professional development in the region, and as a member of Zayed University’s International Advisory Board.

Lott began his career in Washington DC, where he served as chief of staff, spokesman and campaign manager for two members of Congress. He is a published author and former journalist. Before joining Mubadala, Lott worked at global public relations firm Burson-Marsteller for 10 years.