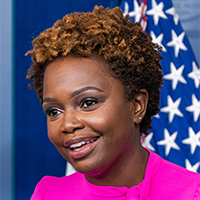 Press Secretary
The White House
US

Given the challenging issues facing the White House and the almost universal rave reviews received by her predecessor Jen Psaki (excepting Fox News, which she humiliated almost daily), Karine Jean-Pierre faced quite a challenge when she took up her new role as White House press secretary in May. But the grace and comfort with which she has has handled the media during her first few weeks, observers have quickly forgotten her status as a novice—and as both the first Black woman and the first openly LGBTQ+ individual to hold the role.

Jean-Pierre was [previously the principal deputy press secretary and deputy assistant to the President. She has been a long-time advisor to President Biden, having served in senior communication and political roles in the Biden administration, the Biden campaign, and to then-Vice President Biden in the Obama administration. Prior to her role on the campaign, she served as chief public affairs officer for MoveOn.org and an NBC and MSNBC Political Analyst.

Previously, she worked at the Center for Community and Corporate Ethics, pushing major companies to change their business practices.