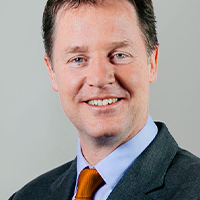 Facebook was enduring its worst crisis to date—criticism of its role in the spread of election disinformation and accusations that it had engaged in speading its own disinformation about competitors—in the fall of 2018, when it named Nick Clegg as its new vice president of global affairs and communications.

Clegg was an interesting choice to succeed Elliot Schrage, who fell on his sword in the wake of various scandals. A former deputy Prime Minister of the UK (when the Liberal Democratic Party he led formed a coalition government with David Cameron’s Conservatives) he had some heavyweight political credentials, while his former stint as a member of the European Parliament and European commission trade negotiator gave him insight into the inner workings of Brussels, which is far more proactive in regulating the social media platforms than the US.

The controversy surrounding Facebook has not receded, with additional crises including the revelation this year that it had retained a firm to spread disinformation about rival Tik-Tok as a means of distracing from its own troubles, but the company has obviously been impressed with Clegg’s performance in a difficult role, elevating him to president of public affairs in Match of this year.