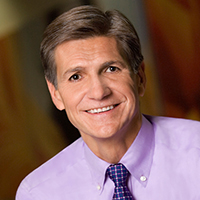 And, as he told us last year, digital technology "makes the PR world arguably more important because there’s so much fragmentation of messaging, what consumers will tend to listen to are opinion leaders that they respect."

Accordingly, Pritchard has also helped P&G fine tune its measurement and remuneration systems to better reflect the role PR plays in its campaigns and has ensured that P&G’s PR agencies have a genuine, coveted, spot at the top-table of strategic brand planning. Pritchard has also overseen the landmark integration of the company’s marketing and communications capabilities, which saw its entire public relations operation consolidate under his leadership.

A 34-year veteran of P&G, Pritchard’s uniquely integrated role — he oversees all brand-building functions, including design and public relations — make him, perhaps, the most powerful figure in the marketing world. Accordingly, efforts to rationalize P&G’s agency roster, which has seen it whittle down the PR firms it works with in favour of five global partners, sparked plenty of interest.