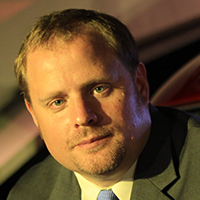 As an iconic company adapting to the 21st century automotive industry, Ford has made some high-profile moves since Mark Truby assumed the job of CCO last May as part of a management shakeup resulting from a two-year slump. As part of its turnaround plan, the company announced in April that it will no longer be making traditional sedan models, a plan to cut costs while focusing on SUVs. In another sign of the times, Ford in January launched Ford Autonomous Vehicles, a new organization charged with accelerating its AV business to capitalize on market opportunities.

With those kind of moves (and that there is little news that comes from a Detroit big three automaker that doesn’t get big play), Ford is destined to stay in the limelight, with Truby at the helm of communicating the continued evolution of the 115-year-old company whose Model T opened up car travel to middle-class Americans.

Can you share a moment in your career when you saw PR's direct impact on business performance?
When Ford was able to avoid bankruptcy like its competitors in Detroit, there was a tremendous amount of goodwill for the company. Communications was able to leverage this goodwill over the course of the next two years to markedly improved Ford’s brand image and corporate reputation.

What do you love about this industry?
To be a good communicator, you have to be willing to learn every day, take risks and find ways to tell great stories. That can be a really exciting career.

What most frustrates you about this industry?
People who don’t understand that communications is a discipline and it requires professionals who know what they’re doing.

How do you relax or change pace when you're not at work?
Watch my boys play sports.

Can you share a book/movie/TV show/podcast that teaches a valuable lesson about PR?
I like the documentary “The War Room” about Bill Clinton’s first presidential campaign. I also like the books “Barbarians at the Gate” and “Game Change”.

If I wasn't working in marketing/communications, I would be...
In newspapers.