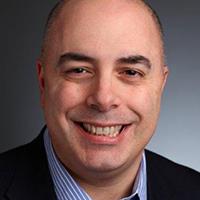 Henry Gomez is executive vice president and chief marketing and communications officer at HP. In this role Henry is responsible for leading marketing, advertising, brand, media and industry analyst relations, executive communications, employee communications, government affairs, global social innovation and environmental sustainability. He also is a member of HP’s Executive Council.
Gomez has more than 27 years of experience in marketing, communications, and broad-based business management. Prior to joining HP in 2011, Gomez ran HSG Communications, a consulting business that he founded. Before that, he served on the leadership team of Meg Whitman’s gubernatorial campaign in 2009 and 2010.

For most of the previous decade, Gomez worked at eBay in a variety of roles including senior vice president for corporate communications and president of Skype. He played a pivotal role in building eBay’s brand during the critical years following the company’s initial public offering.
Prior to joining eBay, Gomez was vice president of corporate affairs at HBO, where he oversaw the network’s corporate public relations, affiliate marketing communications, regional press initiatives and special events.

Previously, he was staff director of Media Relations at NYNEX (now Verizon), where he was responsible for all news media relations involving human resources, labor relations and environmental issues facing the company.

He started his communications career at Hill & Knowlton and has worked on a wide array of public relations and marketing communications challenges in numerous industries.

What is the best advice you ever received?
Listen more than you speak.

What do you enjoy most about working in PR?
The variety of projects and assignments and the access to top executives. By its nature, PR gives you a seat at the table at all the most interesting times.

What was your biggest career break?
Going to eBay and meeting Meg Whitman. I've learned more about communications and business in the last 15 years than I ever dreamed I would.

Who was your mentor and why?
Meg Whitman. She's a terrific leader and an instinctive communicator. She's helped to make me a better communications processional for 15 years now.