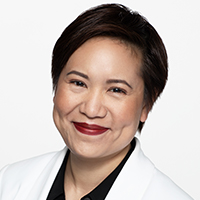 Deborah Yeh is a rare example of a long-standing CMO, she will mark a decade at Sephora next year. Yeh’s longevity makes sense —  Sephora is also a rare brick-and-mortar to flourish in recent times thanks to its experiential approach to retail. During the pandemic the company hit some reputation hits, but ultimately landed on its commitment as a modern and progressive company.

More recently Yeh has also spoken about the dearth of Asian women in executive positions. “We have to disrupt our ideas of what leadership looks like and what leadership sounds like,” she said in a recent interview with NBC News.

During her nine years at Sephora, Yeh has focused on making shopping as experiential and engaging as possible. The brand offers beauty classes, and has face-scanning technology that helps shoppers find products that match their skin tone.

All of which is in keeping with Sephora’s model of giving consumers a hands-on role in the shopping experience, including trying before buying. “The lady at the counter has been replaced by hundreds of people on YouTube. There are more voices. And we are trying to cut through the confusion,” Yeh told the New York Times. Yeh joined Sephora in 2012, after spending four years as Gap’s VP of marketing and leading marketing planning for Target’s entertainment and electronics businesses before that.