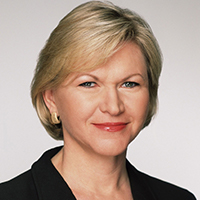 Google Zenia Mucha and one of the results introduces her as “the Karl Rove of the Magic Kingdom,” a reference to the influence she wields within the company and the message discipline with which she holds the company line with reporters and others.

This will be Mucha's last appearance in the Influence 100 at Disney: she recently announced she would be leaving at the end of 2021 after 20 years, along with several other senior leaders, in conjunction with the departure of executive chairman Bob Iger. In her current role, Mucha has had overall responsibility for communications policies and strategic positioning at The Walt Disney Companyand its diverse global businesses, including media networks, parks and resorts, studio entertainment and consumer products. She serves as the chief spokesperson for company and oversees media relations and communications strategy for the company, its various business segments and its philanthropic and environmental initiatives. Her role also includes oversight of internal communications, the Walt Disney Archives and D23, the first official Disney fan club.

Mucha has led the communications and positioning strategy for all of Disney’s business initiatives including 2019’s $71 billion acquisition of Fox’s entertainment assets, as well as earlier acquisitions of Pixar, Marvel and Lucasfilm; its leveraging of digital technology to connect consumers to creative content; and international expansion and growth such as the opening of Disney’s first theme park and resort in China.