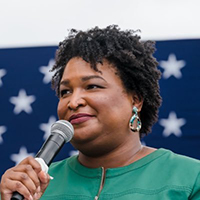 Founder
Fair Fight Action and The New Georgia Project
US

Stacey Abrams may not, strictly speaking, be a communications professional, but she fully deserves her place as one of the most influential 'corporate' communicators in the world this year. When she lost her bid for the Georgia governorship in 2018 by 55,000 votes (and likely due to voter suppression), Abrams founded Fair Fight Action, which thanks to Abrams outstanding communications skills has proven itself to be one of the most effective voter registration and mobilization organizations in the country. Fair Fight Action, in addition to the New Georgia Project which Abrams founded in 2014, helped register more than 800,000 people for the 2020 elections and contributed to not only the state turning blue for the first time since 1992, but also electing its first Black and Jewish senators with Raphael Warnock and Jon Ossoff prevailing in their respective run-offs. Abrams also founded Fair Count, which works to ensure an accurate national census for hard-to-count communities.

Before becoming one of the most successful political organizers in the US, Abrams served 11 years in the Georgia House of Representatives, seven as minority leader. She became the 2018 Democratic nominee for governor of Georgia, where she won more votes than any other Democrat in the state’s history. She has founded multiple organizations devoted to voting rights, training and hiring young people of color, and tackling social issues at both the state and national levels; and she is a lifetime member of the Council on Foreign Relations and a 2012 recipient of the John F. Kennedy New Frontier Award. Abrams received degrees from Spelman College, the LBJ School of Public Affairs at the University of Texas, and Yale Law School.