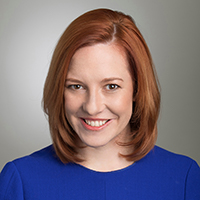 Press Secretary
The White House
US

When then President-elect Joe Biden named his communications team in November of last year, there were plenty of news stories to be written, notably focused on the fact that all the senior figures were women, including several women of color. But as the new team settled in, much of the focus shifted to Jen Psaki, who as White House press secretary is very much the public face of the Biden administration.

Appointed at a time when even Republicans in Congress were challenging the legitimacy of the incoming president with spurious allegations of election fraud, Psaki’s first priority had to be restoring an element or normalcy and fundament respect for the truth to an office that had become something of a sick joke in the previous administration. Press briefings have become more common, their tone less confrontational in the months since.

Psaki previously served as White House communications director from 2015 to 2017 (she was described by the New York Times as “the unflappable and genial point-person” for the Obama campaign) and also brought experience as a spokesperson for the Department of State and in various press and communications roles in the Obama White House. She had also been a contributor to CNN.