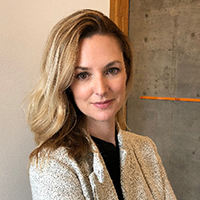 Earlier, she spent four years at Pepsico, first as director of public policy and sustainability and later as chief of staff in the office of the chairman and CEO, working closely with Indra Nooyi. Before that, she was a corporate citizenship advisor at Exxon Mobil and was a manager of the Global Initiative to Measure the Progress of Societies at the OECD.