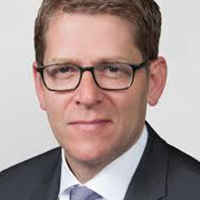 Amazon’s power and profitability has exploded during the Covid pandemic, but it hasn’t all gone smoothly for the world’s largest retailer. Charges of unsafe working conditions, which led to employee walkouts and protests, antitrust hearings in the US and criticism of the company’s environmental impact — and policy — also have been part the Amazon experience, just in the first half of 2020.

Since 2015, former Obama White House press secretary Jay Carney has played a leading role in steering the company through addressing the multitude of public affairs issues as senior VP of worldwide corporate affairs. Highlights of Carney’s tenure include his help playing matchmaker in one of the most fascinating and consequential business deals of 2017: Amazon's purchase of Whole Foods. When, less than a year into his tenure the New York Times published a somewhat epic takedown of Amazon’s work culture, Carney took the unprecedented step of publishing his response, “What The New York Times Didn’t Tell You.” on Medium. The New Yorker, among other publications, analyzed his response and what this ultimately means for the balance of power between journalists and corporate spokespeople.