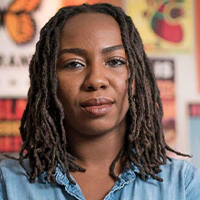 The Black Lives Matter movement was founded in 2013 following the murder of Trayvon Martin — and in seven years the political movement reframed the way America approaches racial justice and anti-Blackness. It has been, of course, a long road with a long way to go still. But in 2020, on the back of many more murders of Black Americans, the #BlackLivesMatter fused into the American collective. For the first time, companies, brands, business leaders, politicians, celebrities and others were saying #BlackLivesMatter without trepidation or caveats.

Opal Tometi is a New York-based Nigerian-American writer, strategist, and community organizer. She is a co-founder of #BlackLivesMatter and credited with creating the online platforms and initiating the social media strategy during the project's early days. The campaign has since grown into a national network of approximately 40 chapters. In 2016, in recognition of their contribution to human rights, Tometi and the #BlackLivesMatter co-founders received an honorary doctorate degree, BET's Black Girls Rock Community Change Agent Award, recognition among the world's fifty greatest leaders by Fortune and POLITICO magazines, and the first ever Social Movement of the Year Award from the Webbys.

A transnational feminist, Tometi supports and helps shape the strategic work of Pan African Network in Defense of Migrant Rights, and the Black Immigration Network (BIN) international and national formations respectively, dedicated to people of African descent. She has presented at the United Nations and participated with the UN’s Global Forum on Migration and Commission on the Status of Women. She is being featured in the Smithsonian’s new National Museum for African American History and Culture (NMAAHC) for her historic contributions.

Prior to becoming Executive Director, she worked as Co-Director and Communications Director at the Black Alliance for Just Immigration.