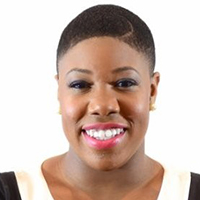 Senior Advisor
Biden For President
US

Symone Sanders finds herself in a not unfamiliar position for a public relations person: within the organization, she is viewed as an agitator, giving a (sometimes critical) voice to key stakeholders; outside the organization, she sometimes faces criticism for being insufficiently provocative, for explaining why her client can’t meet every outside demand.

What makes Sanders different is first, that she is doing the job as a senior advisor to the Biden for President campaign, helping the presumptive Democratic candidate for president build bridges to the electorate (and African-American voters in particular); and second, that she is just 30 years old, surely the youngest ever member of our Influence 100 group.

She has always been precocious, it seems. At the age of 16, Sanders introduced former president Bill Clinton at a fundraising luncheon. She became Bernie Sanders’s presidential campaign spokeswoman by 25. She signed a book deal at 28 and will publish “No, You Shut Up: Speaking Truth to Power and Reclaiming America” later this year. It’s a title that sums up why she earned a place on this list.